The Official Registers of the Angelic Order of Life

It must be increasingly rare nowadays for any library to find itself the recipient of handwritten vellum scrolls relating to the mysteries of the universe, but the L&P has  taken slightly bemused possession of the official registers of the (Manchester based) Angelic Order of Life, plus an impressive four-volume privately printed book by the Order’s founder, William Oxley. The title of this work (first volume published 1891) immediately opens up a late-Victorian world of infinite possibilities: “LIFE and its Manifestations: Past, Present, and Future. A series of revelations from angelic sources containing a new system of spiritual science and philosophy, illustrated by examples.”

Though not a medium himself, Oxley was an enthusiast Spiritualist whose writings record messages of cosmic (if rather obscure) transcendence received at séances. Born in the early 1820s, he made his living in the world of pipes and boilers (“Oxley’s Improved Steam Trap – many thousands now in use”)  while spiritually progressing from Methodism to membership of the New Church founded on the ideas of 18th century visionary/theologian/scientist Emanuel Swedenborg, with its enthusiasm for angels. Swedenborgian ideas fed into Spiritualist beliefs, with a touch of glamour imported from more exotic traditions – Oxley published a translation of the Bhagavat Gita and visited Egypt. Inevitably, he was also involved with Madame Blavatsky’s Theosophist movement, though her correspondence reveals a clash of personalities, with Oxley being informed that he has not been blessed with a genuine astral visit from Madame’s Tibetan spirit guide Koot Hoomi. Despite some exoticist elaborations, Oxley clearly belongs to the Western tradition of the occult revival, with less of Theosophy’s Buddhist philosophy and more emphasis on individual personality, even after death. There is something immensely Victorian about this, though Oxley’s Angelic Order sets it into the widest context, embracing the truth of all religions even down to the Ancient Egyptian worship of “the Atom as the God.” 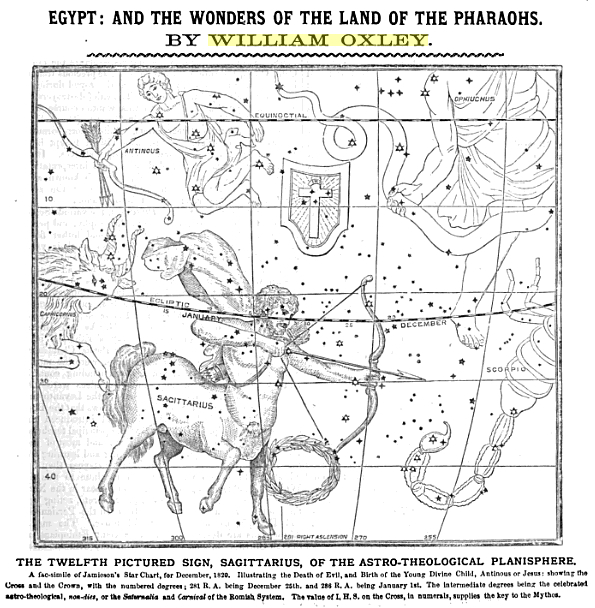 The scrolls record his attempt to codify these ideas into an international order of initiates. While Manchester remains the centre of operations, contacts spread as far afield as America and South Africa. The first scroll recaps on the Angelic Order of Purity, founded in 1881 with Oxley as Grand Master and Recorder under his “duality” name of Osiris. The “Instrument through whom was given the Angelic Revelations” was one Selina S. Lightfoot (“Osira”, the Ecstator.). Twenty members are recorded, but the scrolls primarily document the dissolution of Purity in 1891 and its replacement by the institution of the Angelic Order of Life. Reading through the mystical obscurity, it sounds as though “Osira” moved on to spread the word in America. Thereafter the members of “Life” are recorded (in diminishing numbers), down to 1944, with a sadly solitary entry in blue ballpoint added in 1954. The scrolls are more bureaucratic than doctrinal, with names, ages and addresses, sometimes followed up by notification of death, (though the term “indrawn” is preferred). It is the “duality” names taken on joining that evoke the high, faintly ridiculous, aspirations of the Order – Olympus, Video, Dynamitos, Erectus. Oxley anticipates his own peaceful “indrawal” when his successor, Ariel, will be alone with his remains and hear the Lost Word spoken in his ear. The Lost Word, alas, is not recorded, though Ariel was indeed the anointed successor when Oxley passed away peacefully in 1905 aged 82. At one point the Order also boasted a “President for Newcastle”, one Hugh Brown or “Ithiel”.

Alongside scrolls and books, the Oxley archive includes a remarkable piece of pictorial/physical evidence related to a séance held in 1876, where the medium manifested “the Angelic Spirit Lily” who swiftly produced a wreath of fresh flowers to place on Oxley’s head. The appearance of this apport is recorded in an inscription inside an elaborate gilt frame that also contains a photograph (taken the day after the séance) of Oxley wearing the flowers, plus the faded and desiccated remains of the wreath itself.  Poignant and absurd as this relic perhaps is, Oxley himself remains fascinating, especially as the history of Theosophical/ Spiritualist groups invites new academic investigation. There are holdings of his papers at the Theosophical Society’s London headquarters, and the L&P’s new acquisition, previously unrecorded, has already attracted interest among specialists in the field.