Anyone visiting St Nicholas’s Cathedral since its doors reopened in August might have noticed a small picture in one of the new displays.  It’s a reproduction of a “manuscript map” of Newcastle from the mid sixteenth century.  Even in the tiny reproduction the colours have a captivating freshness.

The original is held at the British Library.  It’s preserved in a volume of about a dozen such manuscript maps mainly of British coastal locations, all dating from the sixteenth into the seventeenth century.

The dimensions of the Newcastle view are 350 by 550 mm.  The medium is ink and tempera on parchment.  It’s unsigned and undated, but the British Library believes it to be the work of an Italian military engineer called Gian Tommaso Scala, commissioned by Henry the Eighth around 1545.  A map of Tynemouth contained in the same volume is also by Scala.

In the 1540s, not only was Henry the Eighth on bellicose terms with Scotland, but his recent dramatic rejection of papal authority had ignited the hostility of Catholic Europe.  Invasion was an increasingly real threat.  Not before time, Henry commissioned reviews of the defences of all his strategic coastal ports.

On inspection, Tynemouth was judged “a place most apt and nedeful to be fortyfied”.  Scala was employed to assist His Majesty’s representative in a survey, with the brief to design suitable necessary defences.  The outcome was the manuscript map of Tynemouth, similar in style to the Newcastle view, but with a coastline to define the geography.  The buildings on the priory headland are indicated with roughly sketched elevations almost like a child’s drawing (distinctly Italian-looking ecclesiastical architecture characterising the church), while strikingly the defence structures round the headland are shown as ground plans and drawn with geometric precision.  It’s clear where the focus of the artist’s attention lay.  (In the event, these sophisticated defences didn’t get past the proposal stage; luckily there never was an invasion.) 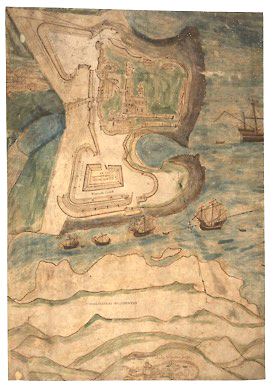 It might seem odd to us that the commission was placed in the hands of an Italian, from the very land of the antagonised Pope.  But nationalism wasn’t yet born.  It was an age when specialists in all branches of knowledge and skill moved constantly around the continent, exchanging their knowledge and selling their skills where demand beckoned.  Scala became known as a specialist in state of the art military defence structures, and spent his life circulating through war-torn Europe.

The British Library’s best guess at the reason for the Newcastle view is that His Majesty’s representative thought it necessary also to check out the river defences of this important river port which lay only a few miles upstream from Tynemouth.  On the map, the most precisely executed draughtsmanship is seen around the newly completed length of Quayside.  For the rest of the town, accuracy varies widely, from the lovingly represented lantern spire (still only a hundred years old) on the church of St Nicholas, to a frustratingly impressionistic arrangement of towers along the town wall, and even some surprising omissions.  Whoever made this drawing - if it was indeed a single person - seems to have completed it by filling in some parts from notes, memory, or even hearsay.

These were state documents, never intended for local consumption.  In the course of the centuries, they joined the treasures of the celebrated Cotton family collection, were bequeathed to the nation in 1702, and came to rest for a time in the British Museum.

The North East was apparently oblivious of the maps’ existence until about 1820.  Their “discovery” came about through Newcastle’s Society of Antiquaries, founded in 1813.  The Society was alerted to the manuscripts by the Vicar of Newcastle.  Reading his new edition of the Monasticon, he had seen references to not one, but two British Museum manuscripts on which Tynemouth Priory featured.  Someone went to London to have a look.  Of greatest initial interest was the second Tynemouth map, “Tynemouth in the time of Queen Elizabeth” which did more justice to the Priory buildings.  But it was noted that the same collection included a “rude bird’s eye view of Newcastle and Gateshead”.

The Antiquaries commissioned the BM to make a “lithographic facsimile” of both of the Tynemouth maps.  The rude bird’s eye view was deemed not worth the expense of copying.  In the end, only the second Tynemouth engraving was published.  It appeared in the Society’s journal Archaeologia Aeliana in 1822, with a detailed description of the Priory buildings. 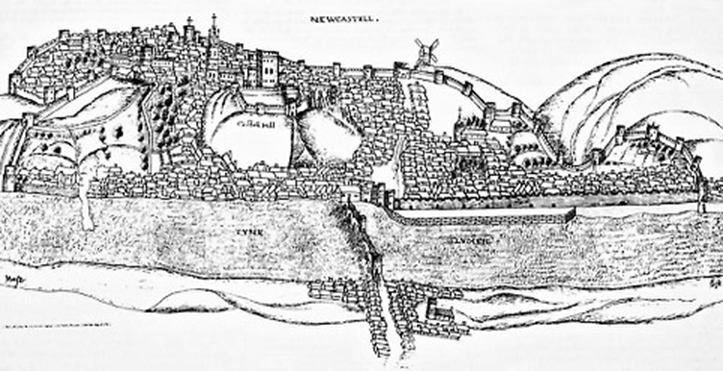 A younger generation of Antiquaries came to value the Newcastle view.  In 1844, an engraving was published in Archaeologia Aeliana, under the title: “Bird’s Eye View of Newcastle upon Tyne, from a Drawing preserved in the British Museum, Communicated by James Orchard Halliwell Esq. F.A.S. &c &c.”

The brief accompanying note says that the view was copied “under the superintendence of Mr Halliwell”, and informs the reader that the original drawing was made about the year 1590.  It would be interesting to know why a date so late in the reign of Queen Elizabeth was thought correct.  We know now that the Blackfriars’ church was demolished soon after 1540, and that by 1590 a very imposing private mansion had newly appeared on the site of the Greyfriars.  The Newcastle of this drawing is essentially pre-Reformation Newcastle.

To lovers of early local maps the Antiquaries’ lithographic copy has become a treasured image.  Who’d have guessed its origins are rooted in invasion anxiety!

Alison is a member of the Lit & Phil with a strong interest in local history.