Daguerreotype of Baudelaire about 1850

2021 is an anniversary year for Dante, Keats and Baudelaire.  All three are poets, but in a modern educational setting (which is where many people nowadays encounter poetry) they are likely to inhabit different departments.  It’s often said that “no-one was less Victorian than the Victorians” and of course their categories were less rigid than ours – they unquestioningly pursued poetic pleasure across linguistic boundaries.  The Modernists who came shortly after were also adept at finding parallels between movements taking place in different art forms.

Perhaps, therefore, 2021 is a good year to find connections, and for me it’s always good to connect everything to the North East, and in particular our Pre-Raphaelite heritage.  The Pre-Raphaelites were huge fans of Dante – so much so that Gabriel Charles Rossetti added “Dante” as his first name.  They were also great promoters of Keats: Holman Hunt probably had Keats’ poetry in mind when he painted Isabella and the Pot of Basil, which you can see in the Laing. 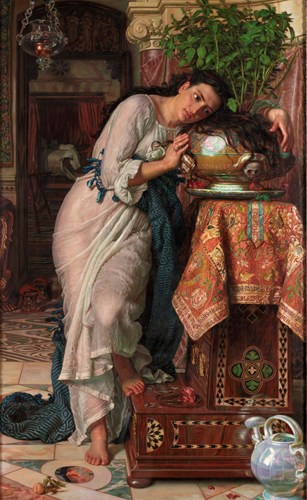 Isabella and the Pot of Basil

There is also a connection to Baudelaire.  Let’s stay in the Laing Art Gallery, and look (virtually speaking) at another of its greatest treasures - Burne-Jones’ Laus Veneris, inspired by the story of Tannhaüser, the knight who aspires to virtue but who also has an addiction to sensual pleasure.  In the painting, we see him either arriving at, or leaving, Venusberg, the place where all our earthly desires are satisfied and yet we feel permanently unsatisfied because life has no meaning. 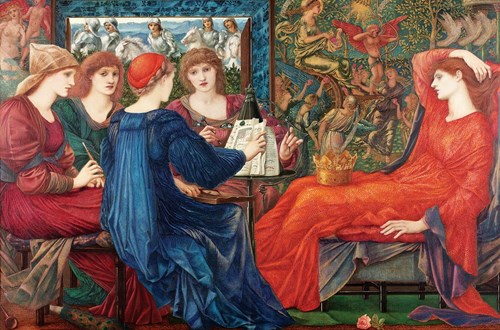 Burne-Jones’s painting took its title from the poem Laus Veneris which Swinburne seems to have first recited on Tynemouth beach to an audience consisting of William Bell Scott, his wife, and his other woman Alice.  Swinburne knew and loved his Baudelaire and was one of the first English critics to praise him, in 1862.  Perhaps Les Fleurs du Mal was the allegedly obscene French book he was reading at Wallington, the book which Walter Calverley Trevelyan snatched from him with the fire-tongs and flung into the drawing-room fire.  As with all cases of book-burning, we wonder how the censor managed to acquire sufficient knowledge of the offending text to condemn it – but of course Sir Walter seemed to have read everything.

Inevitably, when considering the Tannhäuser story, we have to deal with Wagner’s opera, which ran for only three nights in Paris in 1861.  Here I quote from I Am Dynamite! the biography of Nietzsche by Sue Prideaux, who visited the Lit & Phil in 2019:

“While the 1861 Paris Tannhäuser had been a notorious fiasco, it had also had a great effect on the French avant-garde.”

This avant-garde of course included Baudelaire, who drew attention to

“the opera’s open exploration of the idea of sexuality and spirituality being antithetical yet mutually dependent.”

This, I think, is a good point of departure when reading Les Fleurs du Mal.  The milieu Baudelaire inhabited was very recognisable – gay Paree, Manet’s Folie-Bergère, the can-can, Bel-Ami etc etc.  Like most of “the youth of today”, he knew that pleasure was pleasant, and that carnal pleasures were concentrated in the sex-and-drugs-and-music underworld of bohemia - but unlike most of us, he never left Venusberg.  Unlike us, he did not dwell physically in a humdrum world of duty, while dreaming of an escape into pleasure: he languished in boudoirs and opium smoke, and dreamed that he could add a froth of meaning to his daily black espresso of desire.

I was lucky enough to encounter Baudelaire for the first time in the 1942 edition produced by Enid Starkie, described by Time magazine as "a brilliant scholar who pub-crawls about Oxford in bright red slacks and beret while smoking cigars.”  In her introduction, Starkie constantly insists on Baudelaire’s sense of sin and his spirituality:

“He believed that the only hope for the future lay….in aiming at eradicating the traces of original sin….this could only be achieved by long and patient personal effort.”

To me, at twenty-four, the poems were mainly about sex, and Starkie’s glosses seemed to me an unnecessary attempt to make the poems more deep and meaningful.  Reading Les Fleurs du Mal again this year, I can see far more clearly the way in which Baudelaire is imprisoned by his desires, and the depth of his yearning to escape, which is constantly trumped by his conviction that there is no other “meaningful” life to escape to.  I think I can also sense that Baudelaire is not addicted to pleasure for pleasure’s sake, but for the sake of his art: he knows that this unsatisfied state of mind is “la fertilisante douleur” which awakens the seeds of poetry.  He’s not alone in this: his near-contemporary Christina Rossetti may have done the same thing through her on-off love-life.  Next year (2022), we will celebrate the centenary of Larkin’s birth and doubtless the same thing will be said of his bizarre commitment-free infidelities.

Imprisonment in sin inevitably leads us to Dante, who begins his masterpiece The Divine Comedy in the middle of his earthly life, ensnared in an allegorical dark wood.  Perhaps the 35-year-old Dante shared with Baudelaire a long, long adolescence in which wild oats were sown year after year:  he certainly lived long enough to look back on this era as one of youthful folly, and to repent.  Baudelaire, by contrast, never reached the “I’d rather have a nice cup of tea” phase.  He seems aware that his life does him no credit: he refers to the mythical pleasure-island of Cythera as “Eldorado banal de tous les vieux garçons”.

Many of the Romantics who came shortly before Baudelaire read and enjoyed Dante, especially the Inferno.  A particular favourite was Canto V, the story of Paolo and Francesca, who act on their forbidden passion even though it leads to their death and damnation – what better definition of “Romantic” could there be?  The ever-loving pair are not a cautionary tale for the Romantics, but role models.

Given the resurgence of Dante in the first half of the 19th century, it’s no surprise that several poems in Les Fleurs du Mal are clearly inspired by The Divine Comedy, but they aren’t written from either the Dantesque point of view of an oldish man who has renounced the pleasures of the flesh, or the Romantic viewpoint in which being true to self is the meaning of life.    Baudelaire feels just as Dante wishes his sinners to feel – trapped in a punishment which is closely linked to the act of sinning – and the only advantage he has over Paolo and Francesca is that one day death will release him:

(My soul, like my aching bones/ Prays for rest/Heart full of funereal thoughts/I want to lie supine/And roll myself in a shroud/Made from the blinds of the energising gloom)

As we’re talking about Paolo and Francesca, this seems a good time to remind ourselves that Keats possessed a pocket-sized translation of the Inferno, which may have been given to him at Oxford by his friend Benjamin Bailey.  He took the two volumes in his knapsack on his long walk in 1818 to the Lakes and Scotland.  It has been argued that Keats’ dangerous passion - his Romantic dream of climbing Wordsworth’s mountains - cost him his life, as the walk North aggravated his TB. The marginalia in Keats’ Inferno include Sonnet, A Dream, After Reading Dante’s Episode of Paulo and Francesca. 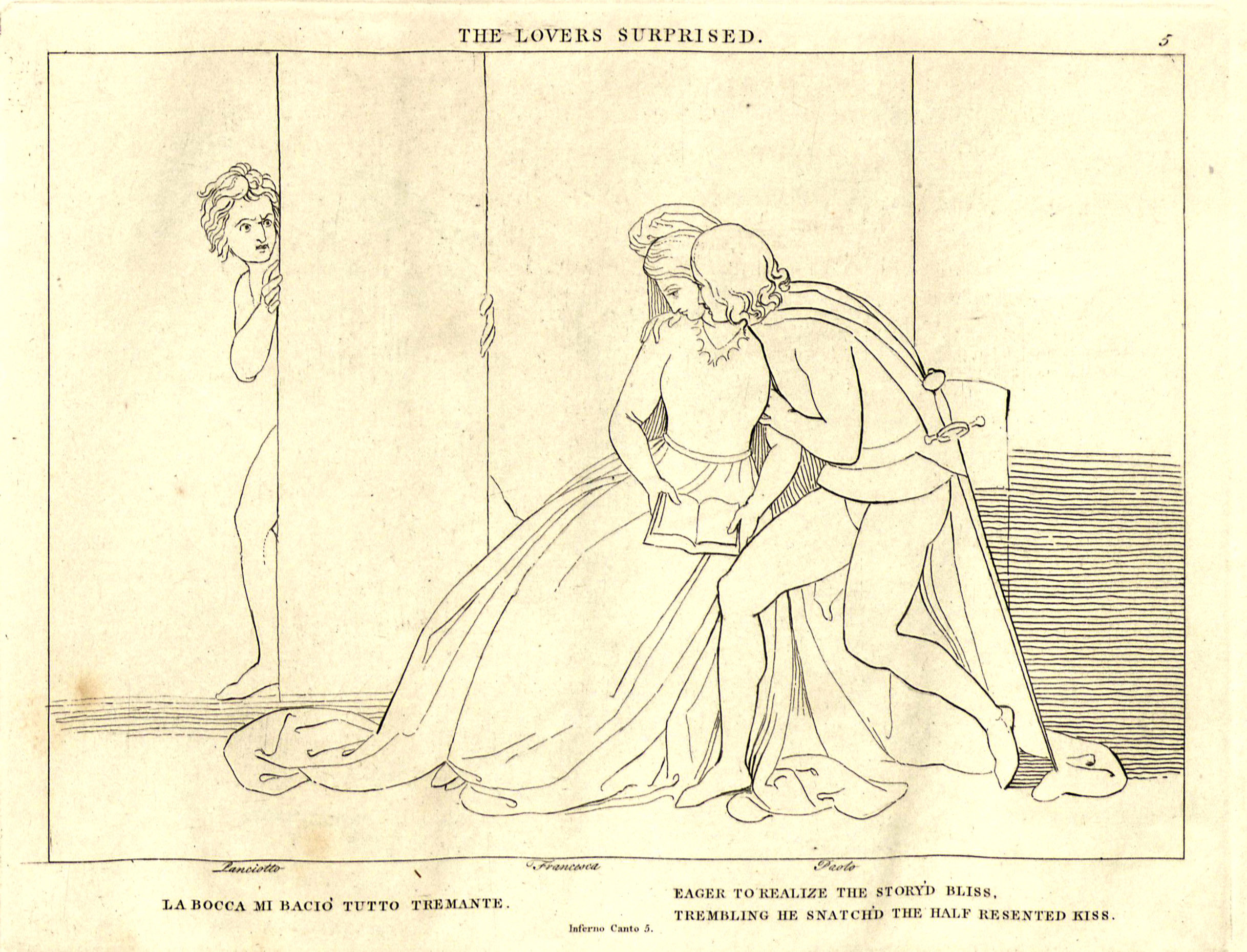 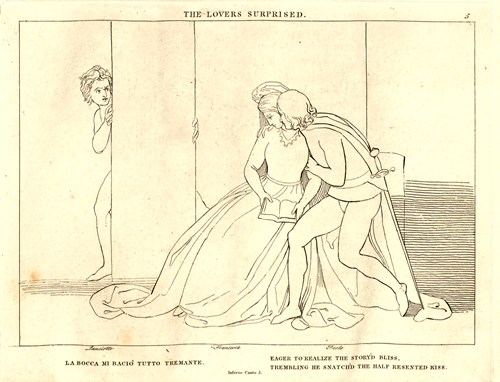 Paulo and Francesca by John Flaxman 1793

Baudelaire, while responding to Dante’s morality, more or less invented the idea of modern art.  He is probably best remembered nowadays as the original flâneur or boulevardier, the loafer who observes vignettes of life in the city and makes art from them. Next year, 2022, will be the 100th anniversary of the publication of The Waste Land by TS Eliot, who freely acknowledged his debt to Baudelaire:

“From him….I learned that the sort of material that I had, the sort of experience that an adolescent had had, in an industrial city in America could be the material for poetry….a great poet can give a younger poet everything that he has to give him, in a very few lines. It may be that I am indebted to Baudelaire chiefly for half a dozen lines out of the whole of Fleurs du Mal; and that his significance for me is summed up in the lines:

I knew what that meant, because I had lived it before I knew that I wanted to turn it into verse on my own account.”

It may not be obvious to us at first sight, but Dante also knew what this meant: he lived in the packed metropolis of Florence, with its greedy bankers, desperate poor and endemic fevers, and it was on the bustling path by the Arno that he first encountered Beatrice as a face or a spectre in the crowd.

Baudelaire insists that poetry has to be made by combining the everyday - material derived from life in a modern city – with the poetic knowledge derived from the study of the classics such as Dante.  This potent mixture is cited as an influence by John Cooper Clarke, whose love of Vincent Price’s The Fall of the House of Usher led him to Poe, which led him to Baudelaire:

“I thought it was better to write clever poetry about everyday shit than to feign an understanding of the entire world and beyond”.

At the risk of annoying one of the last people to describe himself as a Modernist poet, I’m going to generalise a little.  Arguably, a Baudelairean struggle is going on all around us in the pandemic, as many of us are denied the pleasures we take for granted, and we begin to wonder how essential those pleasures are to us, and what life means without them or with them.  We are also forced to ask whether we control our own desires, or they control us, and what the consequences may be for us and others.  Finally, I should add something I might have said at the beginning, which is that Baudelaire is a master craftsman, and in general mercifully brief.  Eliot said that in his own complex times, poetry had to be “difficult”: in our post-modern era, poetry has to be short.  Baudelaire is one of the few major poets who produced a single collection, Les Fleurs du Mal, which is also in effect a “Collected”, so the riches of his poetry are only a single click away.

Keith Jewitt is a retired accountant, an environment enthusiast dedicated to the “Keep Jesmond Clean” campaign and a community activist. He is also the author of In a Magpie’s Eye: The Jesmond Year in Haiku. Keith lives in Jesmond.