The museum at the Lit and Phil opened on 21 November, 1825.  One of its most interesting and rare exhibits was the Coates Mummy. This is its story.

When Thomas Coates of Haydon Bridge brought back a mummy from Egypt in 1820 (as you do!) he had to make a decision – where to put it? In September 1821, he presented it to the Lit & Phil.

Thomas Coates had been an army surgeon in the East Indies. Travelling home via Thebes with a friend Walter Davidson, both men bought a mummy – Thomas a female; Walter a male. Returning to Haydon Bridge in December 1820 after a 22-year absence, celebrations were high and he provided free beer to all the inhabitants. Certainly one way to make yourself popular!

The mummy had been excavated from Gurna, a cemetery for Egypt’s elite, on the west bank of Thebes (today’s Luxor) and was the first to be seen in Newcastle. For most of her time in Newcastle she was known as Bakt-hor-Nekht or Baket-en-her nakht. However, a CT scan a few years ago revealed some hastily executed hieroglyphics and her corrected name now is Bakt en Hor. The scan also revealed some mysterious goings on in the mummification process as both her tongue and vocal chords had been removed. This is very odd as Egyptian dead had to be able to speak their name to Osiris in the afterworld and this, together with some dodgy hieroglyphics meant she was an unknown with no hope of life.

But who was Bakt en Hor? It is probable she lived between 1070bc and 713bc and from the last CT scan we now know she was about 5 feet tall (initially she was thought to be five inches taller) and aged between 21-35 with a full set of teeth. There is nothing obvious to say how she died.

In September 1821, Bakt en Hor arrived at the Lit & Phil. She was examined by a sub-committee who removed the body from the outer coffin (later returning it) although she was not, and never has been, unwrapped. Not everyone approved of this and several people wrote to complain saying “If the mummy be never opened by the Society, to them it will be miser’s gold, it will be worthless, it will be useless and their resolution will be an injury to their posterity”.

However, there was a full description of the case and the contents in the newspapers of the time.

The sub-committee couldn’t decide what the wood of the outer case was and described it as being two inches thick of hard wood – we now know the wood used was sycamore. They didn’t know whether the body was wrapped in cloths or if a cloth had been drawn over an inner coffin. They described the mask of the face which was covered in yellow varnish as “that of the face of a person in a high state of civilisation”. On either side of the mask two rolls were painted in imitation of hair and on the crown of the head was painted a large black scarab. Her name was described as Bakt-hor-Nekht (servant of Horus the Strong) and this remained her name until 2008 when the CT scan, undertaken at Newcastle General Hospital, revealed her real name.

The Lit & Phil were obviously delighted to have such a prize exhibit and the committee thought it might be a nice idea for members and their families and friends to be able to have a pre-view of the exhibit before it was placed on public view. The result was chaotic. Over a period of eight days in October 1821, approximately 10,000 people crammed into the Lit & Phil (at that time situated in the Old Assembly Rooms). As can be imagined, it proved very difficult to maintain law and order and even the committee were amazed that no damage was caused to the mummy. Sadly, on the Saturday a ‘venial theft’ was perpetrated when someone removed and hid the small foot board pinned to the bottom of the coffin thus removing the final text of the hieroglyphics which covered the cartonnage (the casing).

On 31 October 1823 Joseph Lamb, on behalf of the Lit & Phil wrote to  Jean-François Champollion enquiring about the inscription on the cartonnage. Champollion, who cracked the code of the Rosetta Stone, is celebrated as the founding father of Egyptology. Champollion wrote in response “This inscription contains the usual formula – a prayer addressed to several divinities for the soul of the deceased”.

Originally described as a ‘princess’ probably due to Champollion’s translation this citation was later dropped although she has often been referred to as ‘the lady’.

Today, Bakht en Hor can be found at the Great North Museum which opened in 1884 as the Natural History Museum (later the Hancock Museum).

She remains in her linen mummy wrappings enclosed in the painted cartonnage where there are painted images of divine figures and symbols of rebirth. She has amulets around her neck. Alongside her is an undecorated coffin although there is a carving of a female face.

From Thebes to Newcastle upon Tyne – quite a journey. 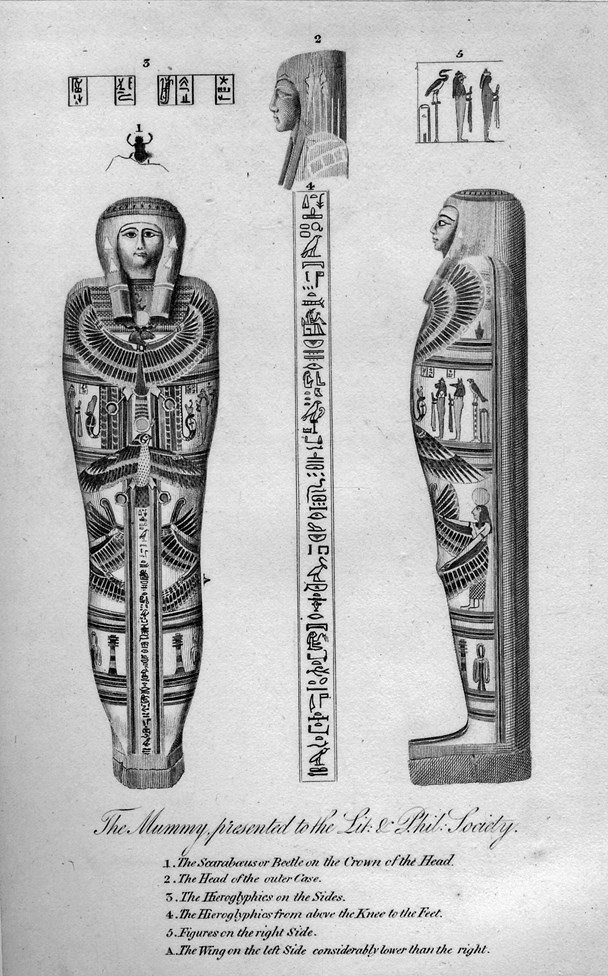 Note: Information can be found in a handwritten volume of “'The Reports, Papers and Catalogues of the Literary and Philosophical Society, 1820-1821'. This also contains a scrap of the original wrappings.

More information about the hieroglyphics can be found in Margaret Maitland’s article “ Hieroglyphs in the North; Newcastle’s early travellers in Egypt and their correspondence with Jean-Francois Champollion” contained in “Every traveller needs a compass” ed by Neil Cooke and Vanessa Daubney.