​A Tyneside Heritage is a detailed local socio-economic history, developed through the lives of four generations of my family from the early nineteenth century to the 1960s.

In Chapters 1 and 2, ‘The Transformation Begins’ and ‘A North Eastern Powerhouse’, the focus is on the nineteenth century development of South Shields, situated on the south bank of the River Tyne where it flows into the North Sea. The town’s economy was booming, with extraordinary growth in shipbuilding, manufacturing and coal exporting.

Robert Chapman JP (1811-1894) started a drapery business before he was thirty, and became a Councillor shortly after South Shields became an incorporated Borough in 1850. The challenge it faced to ameliorate sanitary and housing conditions was formidable. Meanwhile a new Tyne Improvement Commission was improving the river’s navigability, building new docks and constructing impressive piers at South Shields and Tynemouth. 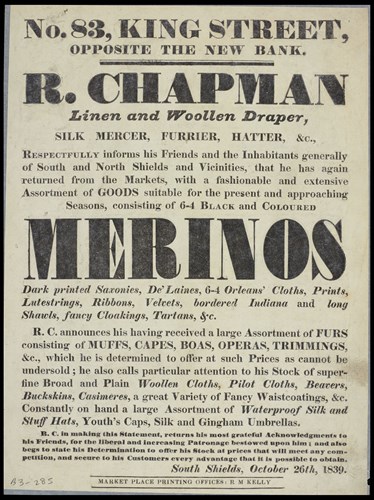 for his shop in King Street, South Shields.

Trade from South Shields was world-wide, and in the mid-1850s Robert invested in Priscilla, a sailing collier built for coal exporting. She was involved in the Baltic trade and also voyaged to Constantinople, the Black Sea and up the Strait of Kerch (bridged by President Putin after his annexation of Crimea) to the Sea of Azov.

In Chapter 3, ‘Full Steam Ahead’, I focus on Henry Chapman JP (1850-1936). Educated at the Royal Grammar School in Newcastle, in his late twenties he founded both a chartered accountancy firm, Henry Chapman Son & Co, and the South Shields Commercial Permanent Building Society. Both were going strong a century later.

Henry and his wife Dora had a busy home life. Keen to provide the best possible education for their eleven children, they sent the boys to the new South Shields Boys’ High School, and the girls to leading boarding schools – Cheltenham Ladies’ College and St Leonards St Andrews.

Chapter 4, ‘Business and Community Leaders’, portrays the town’s leading shipbuilders and industrialists. The best known shipbuilders were the Readheads, Eltringhams and Rennoldsons, from whose yards vessels were exported all over the world. Like Henry they all lived in Westoe, as did the Stevensons, owners of the Jarrow Chemical Company and the Shields Gazette newspaper. These families had numerous interconnections both in business and philanthropy.

‘Sporting Lives’, Chapter 5, describes the most popular spectator sport – rowing on the Tyne. Its professional rowers had an international reputation, and Henry Chapman was a keen amateur rower with the South Shields Amateur Rowing Club.  His and Dora’s son Fred became a famous England rugby player, scoring the first try at the then new ground of Twickenham in 1910, when England beat Wales for the first time in several decades. The family was a great supporter of the Westoe Lawn Tennis Club, whose final of the men’s singles in August 1914 had to be called off since Charles Chapman and other players, volunteers with the 4th Northumbrian Howitzer Brigade, were instructed to report immediately to barracks. The ladies’ single final was unaffected: it was won by Dorothy Chapman.

Chapter 6, ‘A United Front’, describes the First World War experiences of Henry and Dora’s son-in-law Wallace Moir Annand, their sons Charles, Fred and Robert (1880-1963) and daughter Dorothy. Wallace Annand became Lieutenant-Commander in the Royal Naval Division’s Collingwood Battalion, sent to Gallipoli as part of the wholly unsuccessful Dardenelles operation. He was killed going over the trenches in the Third Battle of Krithia in June 1915. Fred Chapman, a doctor as well as a rugby player, served with the Royal Army Medical Corps both in the Gallipoli campaign and on the Western Front. He survived the war, suffering only minor injuries.

Robert Chapman was already a Major and commanding officer of the 4th Durham Battery when war was declared. His younger brother Charles was a Lieutenant serving under him. The Battery moved to France in 1915 and was heavily engaged at Ypres, where Charles died a year later. Meanwhile Robert had moved to the Somme, as a Lieutenant-Colonel in charge of an artillery brigade. He was badly injured in April 1918 and invalided home. Their sister Dorothy was a Voluntary Aid Detachment nurse, who died in Egypt after contracting ‘Spanish flu’ in August 1918. 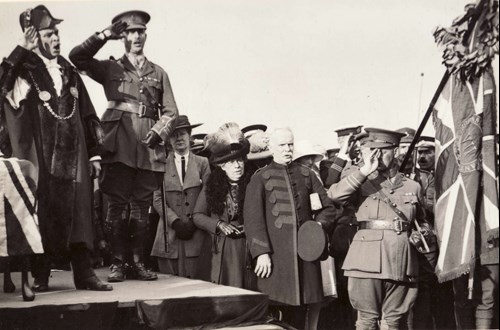 Chapter 7, ‘Post-War Challenges’, sees Robert Chapman becoming a Borough Councillor in 1921. Housing was one of the challenges, with the Council quick to start a new building programme. Unemployment started to increase, with the local economy’s over-dependence on a few heavy industries becoming clear as it entered into depression. The shipyards were in trouble, there was a miners’ strike and then the General Strike.

In 1929 Ramsay MacDonald, Labour MP for Seaham in County Durham, became Prime Minister. His government proved unable to deal effectively with the major recession, and in August 1931 he formed a National Government. In October he called a General Election, and Robert decided to stand for Parliament in the hitherto safe Labour mining constituency of Houghton-le-Spring. This was the famous 1931 election, with its landslide result against Labour. Robert won the seat. 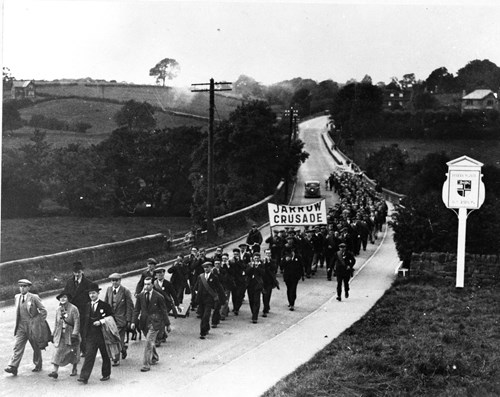 In Chapter 8, ‘Mayor and Mayoress of South Shields’, Robert was also elected Mayor of the Borough Council. The government instructed local authorities to make substantial cuts in expenditure, forcing local authorities’ Public Assistance Committees to introduce a ‘Household Means Test’ to assess the level of financial support they would offer unemployed applicants. Robert, as Chairman of the South Shields Public Assistance Committee, handled an exceptionally difficult situation, including a 25,000 strong march and demonstration, with skill and humanity. Across the river in Tynemouth there were riots against the hated Means Test.

Robert was strongly committed to helping the unemployed. He founded the ‘Mayor’s Scheme for Unemployed Recreation’ based in Zion Hall, a former Methodist chapel which he owned, and which the Prince of Wales visited. A wide range of activities, indoors and outdoors, was introduced, with Hélène as Mayoress leading on those aimed at women.

Robert’s period as an MP, described in Chapter 9, ‘Parliament and the “Special Areas”’, included major speeches on housing and education policy and ceaseless, and successful, efforts to attract government funding for initiatives to create new employment. He was not deflected from these efforts by losing his Houghton-le-Spring seat at the 1935 General Election, when all the County Durham constituencies which had elected National candidates in 1931 switched back to Labour. He expressed strong support for the report of a government-appointed ‘Special Areas’ Commissioner which advocated the building of government-funded ‘trading estates’ to attract new industries and jobs. North Eastern Trading Estates Ltd was duly set up, Robert becoming a Board member and later Chairman. Its pioneering Team Valley Trading Estate at Gateshead was opened by King George VI in 1939, and became a major success story.

Chapter 10, ‘Undercliff’, focuses on the domestic life in the inter-war years of Robert and Hélène in the splendid early Victorian house they purchased in 1923, moving in with their young sons Robin and Nicholas. With its spacious rooms and large grounds it was ideal for entertaining. Numerous garden parties were held, including for the officers of HMS Malaya during Tyneside Naval Week, and each year there were fêtes for the YMCA, church groups and other good causes. 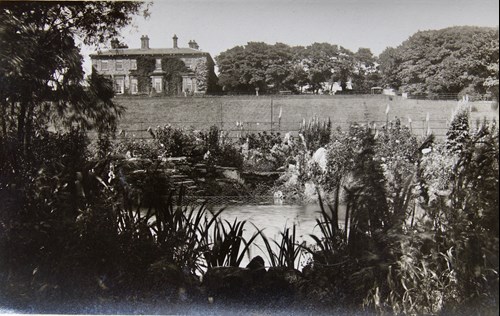 ‘Undercliff’, the home of Col. and Mrs. Robert Chapman in Cleadon, 1932

Chapter 11, ‘The Second World War’, describes its impact on South Shields and the family. Robert’s nephew, Lieutenant Richard Annand, whose father had been killed at Gallipoli, served in the Durham Light Infantry in Belgium, becoming one of the first Victorian Cross holders of the war. Back in South Shields, Robert’s wife Hélène became the Centre Leader in the Women’s Voluntary Service for Civil Defence, while Robert himself was appointed County Durham’s Welfare Officer for the Armed Services. Both roles were demanding, especially as Tyneside with its shipbuilding and armaments factories was a target for Luftwaffe bombers, which caused significant damage in 1941. 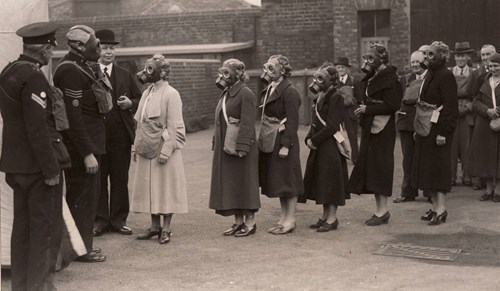 Chapter 12, ‘Royalty and Recognition’, describes the post-war years. In 1946 Robert was appointed Vice-Lieutenant of County Durham, and in the following year he escorted the young Princess Elizabeth around the Finchale Abbey Training Centre for the Disabled, where he was Chairman of the Management Committee. In 1948 Princess Marie Louise stayed at Undercliff after opening in Sunderland a new centre for the YMCA, Robert being President of its North Eastern Division. For her part, Hélène was particularly busy as Durham County President of the British Red Cross Society. In 1953 she donated an ambulance to the Society, which was formally accepted on its behalf by the Princess Royal (Mary, Countess of Harewood). 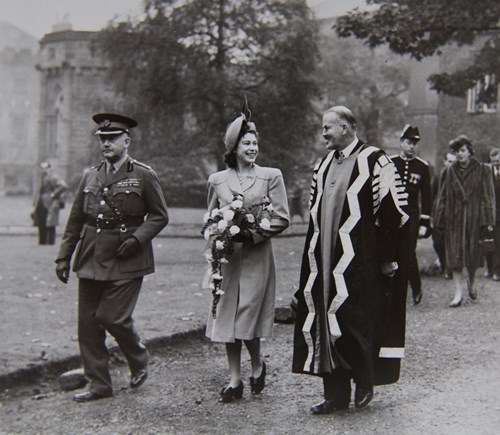 Princess Elizabeth (as she then was) enjoying a joke with Dr. J. F. Duff, Warden of the Durham Colleges

Robert, having been knighted in 1950, was created a Baronet in 1958, the year before he and Hélène celebrated their golden wedding anniversary. He died in 1963. At his memorial service the Bishop of Newcastle expressed the whole community’s debt ‘to a most distinguished life of public service to the nation and the North-east, and for an example of unremitting endeavour to further the good of all’.

TO ORDER THE BOOK

The cover price for the book, published by The History Press, is £25. Peter Chapman is offering it to Lit & Phil followers and friends for £15.00 including package and postage (payable on delivery). You may buy a copy by calling in to The Lit & Phil or Blackwells or Waterstones in Newcastle. You may also order one directly from the author: