Tales of Lost and Found - and Told

This time last year I was confined to home with a badly broken wrist – a victim of a Christmas Pudding incident. Don’t ask. Just as I was released and able to drive again we all went into pandemic lockdown. Then, with a few brief intervals, that was it for the rest of the year. So a visit to the Lit and Phil in December for a few hours in the socially-managed company of a handful of people had both poignancy and pleasure. We were there to broadcast a live stream event talking about the audio tale collection, Lost Found and Told (LF&T), that November Club had made. This is a set of newly-written, interlinked stories set in and about Northumberland. It draws on some traditional fairy-tale settings or characters or tropes but with plenty of spin.[1]

I consider myself a fairly thoughtful person – I am a member of the Lit and Phil after all! – but lockdown has made me more reflective, more questioning of details, of ideas and, in the case of these fairy tales, of ownership. In this blog I thought I would explore the multi levelled ownership of the audio tale collection we made.

The making of the tales involved a huge range of talents. The concept came from the then Artistic Director of November Club, Cinzia Hardy. She had an idea and a vision she wanted to explore. But her work is always rooted in Northumberland and always includes local people’s thoughts and concerns. She and some of her team interviewed a huge range of the Northumberland people of all ages and backgrounds to tease out what is important to people of the county, what might make us distinctive, what our aspirations are, what forms our character, what our fears and hopes for the future might be. As you might imagine this threw up a massive quantity of material, some of it quite contradictory. This is how November Club productions have usually emerged. As the writer of many of them I have been involved in some of the research but occasionally, as with LF&T, I am presented with a mass of research material and asked to make something of it.

To complicate matters further, this hotch-potch was intended for live performance by a group of multi-talented actors who did not want text! My task was not to write a play for them but to give them story outlines that they would perform in mime and movement, or with puppets or objects or dance or music or whatever, but with minimal spoken word. Two summers ago the actors and the creative team gathered in several village halls across the county to improvise vignettes and playlets. We wanted to see how classic stories could be turned into Northumberland tales. Once again there was a plethora of material. We added as much local depth as we could. We drew upon the county’s history, geography, geology, myths and folklore. The wonderful Hannah Fox drew archetypes and characters and threw in materials and puppets to animate, enabling the actors to make their stories.

We generated numerous possible storylines together. We bounced off each other’s creativity and gave each other freedom to explore impossible ideas that turned out to be quite doable with the right imagination. We told each other stories and then mashed them up together to see what would come out. It was huge fun and very stimulating.

In all of this, the narratives were important but the words were not. This was the only part that, being a word person through and through, I enjoyed less. Eventually I did what writers have to do: I went off alone with everything we had gathered and tried to sew it all together into a coherent, performable show. I wrote some dialogue as the framework to make the intended evening gel. I interspersed the stories in prose knowing that much of what I put down would not be uttered but that the ideas, the narrative and the aesthetic would inform what emerged. Some of the material drew heavily on what we had worked up together; other stories were my own but used the research materials. When you write for theatre you know you have to give up control as soon as the director takes your script. But this was that experience on speed. Because we had worked so closely together I trusted the team and stood back.

However, as you know, history played into my hands. The plans to mount a fully staged touring production of our stories in autumn 2020 remained as a hope for quite some time but it finally became apparent that there would be no shows during that whole year and that no plans could be realistically made.

We had been in similar position previously. In 2019 we had planned an interactive, site-specific Christmas show for the Lit and Phil. I had done much of the preparation on a story loosely based on A Christmas Carol but, as often happens, funding applications were turned down and the ambitious plan was shelved. Having done so much work I decided to write up the piece as a prose story. November Club ended up presenting it as a semi-staged reading with a bit of drama thrown in – a hybrid which actually worked nicely at the Lit and Phil.

This time I anticipated only writing up the Northumberland stories for my own satisfaction and perhaps, in time, to try and publish them. Times were different. But Cinzia Hardy and I had been talking about the pleasure of being read to, of the wintery joy of listening to a voice telling you a story while you sat comfortably by the fire losing yourself in a narrative. And so, because technology was the only way to get creative content out, because talented actors were all too available and because November Club loves a new challenge, Cinzia took the stories and learned how to make them into audio tales. She wanted more than just a voice reading so she brought in Matthew Tuckey, a sound artist who wove atmospheric sounds and music through the stories. 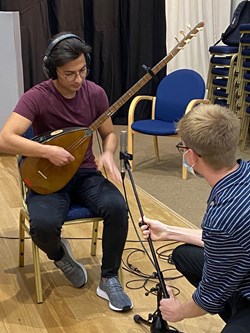 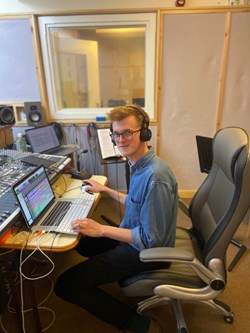 As I had sewed together the research materials, the classic tropes, the new tales and so forth, so Matthew and Cinzia with the actors and musicians added layers of richness and a musical wrapping to bring the whole set of tales together. What emerged was something that could indeed be enjoyed by a warm fire but which is, in my experience, even better listened to through headphones while out on a Northumbrian walk on a cold bright day.

So who ‘owns’ these tales? The fairy tale classics we used are almost universal. They are common property and we may therefore play with them as we wish. In our tales you will find echoes of Snow White, Rapunzel, Rumpelstiltskin and more. But our stories are not their stories. The echoes are there to draw you in, to make you feel at home in familiar territory and then to surprise you. The hobs and brags and all their folkloric kin belong to Northumberland  but also to many other cultures and languages; only the names change. The people who gave their thoughts and concerns – themes of lost children, worries about environmental change, greed and loneliness and much more – they have all contributed. The actors who did not want words but whose imaginations flung stories into the air and helped them land in LF&T they certainly added dimensions. The original vision of Cinzia Hardy started the whole thing. The music by Katie Doherty, Khalil Abdulrahman and Lawrence Neale and Matthew Tuckey’s soundtrack that gives Northumberland a character of its own. They are all owners and contributors. We could not have made these tales without each other.

[1] If you are interested in watching the livestream it is available here: https://www.youtube.com/watch?v=kTyKm07YaJE