My debt to the Lit & Phil

December 2020 was significant for me in more ways than the obvious annus horribilis we have all been through. It marked the end of a major chapter in my life. As I sat in the Sir James Knott room on 16th December 2020, with an audience that joined me via live stream, I stepped down as artistic director of November Club, the performing arts company I had founded as European Players back in the early 1990s, and symbolically handed it over to my successor Joe Hufton.

It was important to me that this event should take place at the Lit & Phil. Since moving to North East England in the late 1990s and re-branding European Players as November Club, I have produced several productions in collaboration with the library. Each has had its own distinctive traits, and all have been a joy to work on, together with artists, actors and the library staff and membership. Experiences the Lit & Phil gave me helped form my professional career as a director and theatre maker. I have spent some of my happiest days working in the library. It all began in 2007 with what was then my most ambitious theatre production at that time, The Novocastrian Philosophers’ Club (NPC). 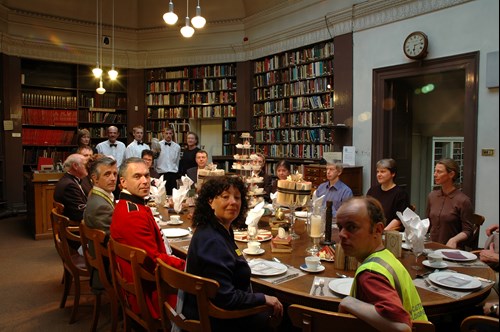 In those days I was working as a creative producer. I had trained as an actor and dancer and worked as a movement director but had never directed an entire show myself. I invited the late artist and performer Maurice O’Connell and the freelance theatre maker Alison Andrews to write and direct the NPC using the format of a guided tour. They did a fabulous job. A small audience of 15 people at a time journeyed around the hidden world of the library and its neighbour the Mining Institute, led by Maurice. The performance, although a work of fiction, was created in response to the organisations’ archival material, the people who inhabited the institutions and of course, the buildings themselves. The audience became members of a fictitious Club (the Novocastrians of the title) and were introduced to a world where books came to life, paintings seemed to speak, and an explorer re-emerged from a forgotten century to fall in love with a librarian. The production and its format was very well received, winning two Journal Culture awards. It was clear there was an appetite in the North East for performances outside of the usual theatre buildings and thus began a rich and fulfilling association with the Lit & Phil.

A few months later, before any of us had even had time to catch our breath, Kay Easson (the librarian of the Lit & Phil) approached me about collaborating on a new project about World War One. She is a passionate scholar of the Great War and, inspired by what we’d achieved the previous year, she had written an original text for what was to become We Got Mittens Too!  At the heart of this production was the commemoration of the 90th anniversary of the end of the First World War.  The inspiration came from the archives and collections housed at the Lit & Phil, and more importantly the stories of the people who inhabited the buildings, the members and the staff, those who fought at the front and those left behind. I knew that to make this show meaningful we needed to go to Ypres, to visit the war cemeteries and trenches, to immerse ourselves in the world of the war so as to recreate it back at the Lit & Phil. The artistic team was enlarged, including Kay herself. Julia Stafford was commissioned to design a new floor plan of the main library, transforming it into a trench map. 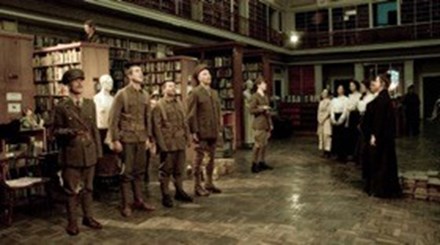 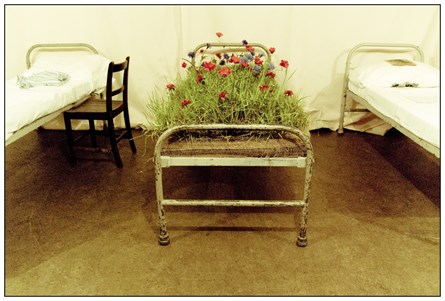 From "We Got Mittens Too!"

I remember the day in Ypres, by the Menin Gate, when Maurice O’Connell came up with the idea of the bandaged books. We’d been contemplating how we could ever represent the millions of people who lost their lives and he suddenly asked Kay how many books there were in the library. We realised that the books which mean so much to the Lit & Phil could stand proxy for the lives lost in battle. As soon as we returned, Imogen Cloet, the designer, gathered Lit & Phil volunteers to begin bandaging books and bloodying the bandages. Next, we got a group of young army cadets involved in the project; they were to act as stretcher bearers. It became a very emotional time, seeing those young cadets solemnly carrying the bandaged books around the library. I  remember overhearing some of them chatting during a coffee break about war and whether they believed in it at all. 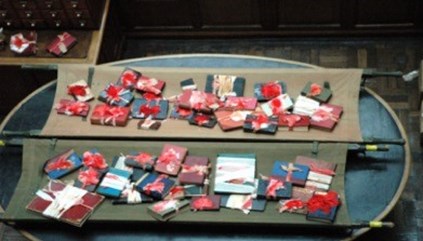 We Got Mittens Too! won Performance of the Year at the Journal Culture Awards the following year. The trophy sits proudly on Kay’s desk. 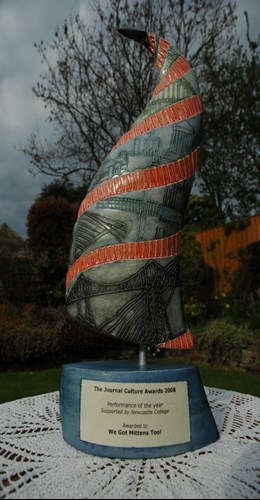 There followed several years of working in other special venues. And I had plucked up the courage to direct the pieces we made. The company I had founded also got its new name, November Club. Working with Maurice O’Connell I directed and choreographed Traces & Graces, a promenade performance in the private garden of a Northumberland manor house. As November Club we told the story of a real elephant who appeared on the stage of the Theatre Royal, Newcastle. We roped the centre of Berwick upon Tweed with 900 metres of rope to celebrate its past. I directed several promenade productions, written by Fiona Ellis, in the mansion at National Trust’s Wallington, working with some of Sir Charles Phillips Trevelyan’s descendants along the way.

Over the  years I have brought together a range of talented artists and associates and local people from different backgrounds and practices to create and shape the multi-layered approach that November Club became famous for. What makes projects like these so rewarding has been the inclusive research and devising process. The early productions at the Lit & Phil are infused with stories told to us by the cleaners and caretakers who led us on bizarre journeys throughout the buildings, recounting familiar incidents and unlocking narratives as well as doors.

2014 saw November Club produce Cautionary Tales from the Trenches, a fruitful collaboration with library staff and members. It was part of the Juice Festival for young people and took place during normal working hours. We created a world where it was 1914 and the world was at war. The head librarian had gone to fight for his country, leaving hapless Miss Hedley (played by Christina Berriman-Dawson) to step into the breach. Our young visitors were taken on a quest to search through the countless shelves and archives for lost items, urgently needed for soldiers at the Front. They followed a map through nooks, crannies and rooms full of secrets, uncovering stories from the trenches and the library’s special children’s collection which was created during World War One. The quest was informed by work with Year Five pupils at Walkergate Primary School, Newcastle, who came to Miss Hedley’s rescue by delivering a lecture on the reasons behind the outbreak of the war and life as a soldier in the trenches.

2016 saw the next collaboration, Reflections of Newcastle 1914 -18. Marking the centenary of the Battle of the Somme, it explored the cultural, intellectual and social life of Newcastle during World War One through three iBooks featuring city walks beginning and ending at the Lit & Phil. It combined intimate storytelling with a rich collection of archive material, inviting viewers to explore Newcastle through this turbulent time and to see the city and its people in a new way. With a narrative written by Fiona Ellis, who had become a regular collaborator, four characters led viewers on three tours of the city by inviting them to borrow an iPad to read at the Lit & Phil or to take it out on to the streets and follow the stories in situ. You can see lots more about the project, watch the films and download the free iBooks to your own iPad by following this link https://www.novemberclub.org.uk/Event/reflections-of-newcastle-1914-18

Finally, in 2019 I directed A Lit & Phil Carol, with a nod to Mr Dickens’, again written by Fiona. This family-friendly, story-telling production preceded by an extensive engagement programme inspired by the themes of Charles Dickens's A Christmas Carol really was tremendous fun. The premise was that the Lit & Phil’s Head Librarian, Ebenezer Compendium, wanted to sell off all the books in the library, all 170,000 of them. He wanted to make money. Only science and rational thinking existed in his world. He would rail “what use is imagination and creativity!”. His two assistants, George and Frank, were very worried for the future of the library and did everything they could to stop him… but could they convince Compendium to change his mind? What a fitting way to end my collaborative working with the Lit & Phil as November Club’s artistic director by directing a show that celebrated books, creativity and reading. 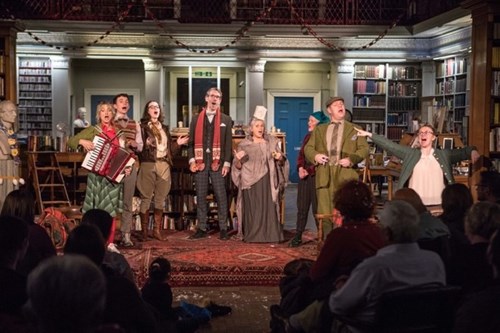 I owe the Lit & Phil a lot. Kay Easson and the trustees have shown enormous faith in my ideas over the years. They have taken artistic risks alongside me and have supported me, no matter how mad my ideas may have sounded at the offset.  They have taken a chance on me and by so doing have helped form me into the director I am today.  Although I have stepped down as artistic director of November Club I will continue to enjoy everything the Lit & Phil has to offer as a member and regular visitor and who knows, there may be more theatrical adventures in store for me there in the future… watch this space!

Cinzia stepped down as artistic director in December 2020 to return to freelance directing and theatre making.