The beginnings of the Lit & Phil

They were unsettling times. Following hard on the American Revolution (1776-83), the sweeping aside of the French feudal system gave rise to government fears of popular insurrection as rumours of a London insurrection swept the capital. Those fears escalated in November and December 1792 when the French promised armed support for all subject peoples. On 1 February 1793 France declared war on Great Britain and the Netherlands.

The controversy sparked by the French Revolution did not just inspire intellectual debate in educated circles. Influenced by Paine’s notion of universal rights, ordinary working people, beginning to make connections between their economic struggles and political corruption, began to organise into political groups for the first time, and to call for reforms that would enable them to take a more active part in deciding how the country was governed.

Indeed, the political polarisation of the 1790s proved deeply divisive in some communities, and the rifts were felt for years to come, re-emerging as the movement for parliamentary reform revived itself after 1815.

In 1791 Thomas Paine, who had done much to help the Americans in their conflict with Britain had published his book Rights of Man in favour of the French Revolution. He argued that aristocracy and monarchy were unlawful, and as a result of his ideas being condemned as seditious libel he had to escape to France.

The Northumberland militia had been ordered to assemble at Alnwick on Monday, December 10th 1792. On Thursday the 13th, the common council of Newcastle passed resolutions expressive of their determination to support the constitution, to repress the dangerous spirit of disaffection, and to promote a veneration for the laws; and on Monday the 17th, a meeting of the gentlemen, clergy, freeholders, burgesses, and inhabitants of the town was held in the Guildhall, when resolutions were adopted to support the magistracy in preserving the peace, and in bringing to legal punishment all persons concerned in seditious publications.

In February, 1793, the seamen belonging to the port of Newcastle associated to defend themselves against the threatened impress. A subscription was opened at this time to encourage volunteers to enter into his majesty's navy, from which fund 320 able-bodied seamen received one guinea, and 77 ordinary seamen half a guinea each. The common council of Newcastle also offered two guineas for every able, and one guinea for every ordinary seaman, that volunteered into the navy.

It was in that context when in the winter of 1792 a group of gentlemen got together in Newcastle with the idea of creating a society for the promotion of natural sciences and general literature. The Rev. Turner was asked to draw out a sketch of the arguments for such an institution and as a result a meeting was held at the Assembly Rooms on Thursday January 24th 1793 at which it was decided to form a Literary and Philosophical Society and a committee formed to draw up a plan. 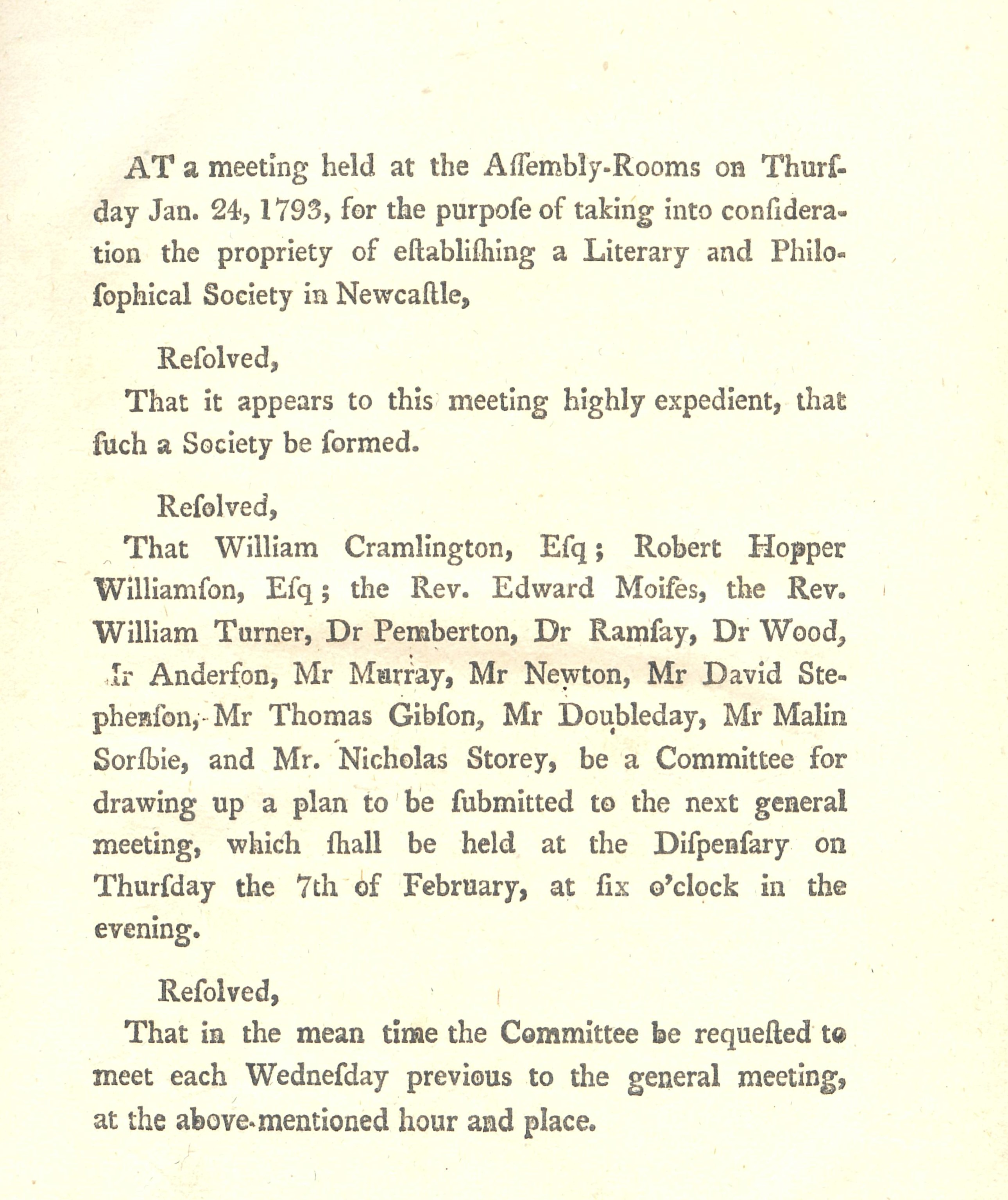 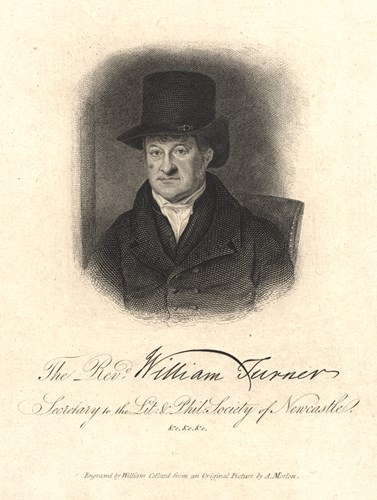 The Assembly Rooms where they met were not the present Assembly Rooms on Westgate Road but in Ridley Court opened around 1736, just off the Groat Market, so named from its being the place where meal and groats were originally sold. The library was later accommodated there until the Lit &Phil moved to its own purpose built premises, Ridley Court then being converted into a Masonic Lodge.

On Thursday February 7th 1793 a general meeting was held at the Dispensary to discuss the plan. The Dispensary was at St Johns Lodge, Low Friar Chare (now Low Friar Street), Newcastle Upon Tyne. The Lodge had been built in 1777 as a Masonic Lodge. However, in a short time, “extravagance and the introduction of politics ruined the Lodge and it was sold for £320”. 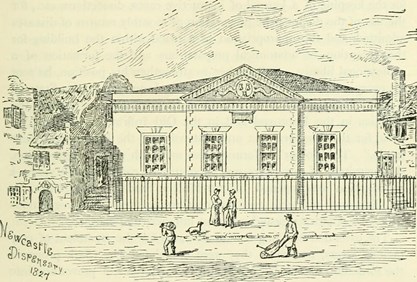 The Dispensary was a charity set up in 1785 to give advice and medicine for those who could not afford to go to the Infirmary. In 1790 the charity bought St.John’s Lodge from the Free Incorporated Company of Saddlers for £626.2s.6d. The building consisted of "a hall for the meetings of the governors, a shop and waiting room for patients, two consulting rooms for the physicians and surgeons, an electrical room, and lodgings for the apothecary and his assistant, with a small laboratory behind the building". In 1786 the plan of a general inoculation, for preventing the great mortality occasioned by the small-pox, was revived and carried into execution. An additional department was also established in 1789, for recovering the lives of persons apparently dead from drowning or other causes.

At that meeting on February 7th 1793 with the Rev. Edward Moises in the chair, a plan for the formation and government of the proposed society was presented by the committee and adopted by the meeting, which formed itself into a society by the name of “The Literary and Philosophical Society of Newcastle upon Tyne” (which is still its official name but now known more familiarly as the Lit & Phil). Although the names of all the officers for the Society are recorded, little more is known about some of them. We do, however, know that William Cramlington made his money in rope-making, salt making and coal mining, was elected Sheriff of Newcastle Upon Tyne in 1775 and Mayor in 1796. Robert Hopper Williamson was a lawyer, recorder of Newcastle and chancellor of Durham and both were elected as Vice-Presidents. 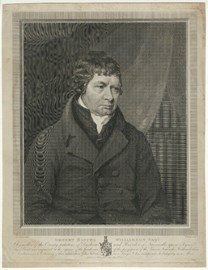 "The Society was to consist of ordinary and honorary members; the former class to be persons resident in Newcastle and its vicinity, who should each contribute one guinea annually (about £80 in 2021). The meetings of the Society to be held on the evening of the first Thursday in every month; at which religion, the practical branches of law and physic, British politics, and indeed all politics of the day, were deemed prohibited subjects of conversation". There were 73 ordinary members at the end of the first year.

It appears from the fifth resolution, passed at the first general meeting, that one of the leading objects of the institution was to provide a library for the use of its members, upon all the allowed subjects of discussion at its stated monthly meetings. For this purpose, the committee were empowered to purchase books, under the direction of the general meetings; or, when they should see it to be proper, in compliance with the recommendations of individual members. It also appears, from the eleventh resolution, to have been the intention of the Society, at some future period, to adopt further measures for the establishment of a general library and indeed later that year a committee was formed to consider immediately attempting such an establishment and the committee subsequently held repeated meetings eventually deciding that a member, in “sufficient compensation for his subscription” …”the use of books and other property so long as he continues to be a member”.

Over the years the Society and library grew and grew, but this is only the beginning of and there are many things to tell about its over 200 year history.

The impact of the French Revolution in Britain by Ruth Mather: https://www.bl.uk/romantics-and-victorians/articles/the-impact-of-the-french-revolution-in-britain#

Thanks too to Paul Gailiunas for his help.