Almost from its very beginnings in 1793, the Lit & Phil has presented talks and lectures on a very wide variety of subjects. As Robert Spence Watson writes in his History of the Society, “In 1793 ..unless in University towns, they (lectures) were few and far between, and for any practical purposes there was no such thing as the popular lecture.”

From its earliest days the Lit & Phil sought to remedy that situation by presenting lectures, and in the 19th and early 20th century particularly, many of the lectures were given by eminent scientists such as Swan or engineers such as Stephenson. One of the first such lectures was given by someone with a much less distinguished scientific background, the colourful character known as Dr.Katterfelto (or depending on his audience, Colonel Katterfelto). Indeed his name probably wasn’t Katterfelto at all - there is a small town in central Germany called Catterfeld, and he was certainly German, the rest is speculation.

He had arrived at Hull in September 1776 from Germany with his pregnant wife, young daughter and a black cat. Almost immediately he started to give “exhibitions” which were an entertaining mixture of popular science and conjuring tricks whilst taking into account the great interest at the time in natural philosophy (i.e. science). The York Courant printed an advertisement which stated that “His Lectures and surprising Experiments are Philosphical, Mathematical, Optical, Magetical, Electrical, Physical, Chemical, Pneumatic, Hydraulic, Perotic, Hydrostatic, Senographic, Pollengestic and Caprimandic Arts.”

After several  years of touring, in 1780 he arrived in London where his show had a run of three and a half years. In 1781 - 1782 influenza was rife throughout Europe, and by 1782 London was in something of a panic about the approaching pandemic. Not one to miss an opportunity, Dr. Katterfelto advertised that by using his Solar Microscope (a projector) he could show the live bugs that were causing the illness (he was actually showing the simple microorganisms found in everyday life). His lectures were a great success with 700 people coming to his shows in a week. Ironically, he caught the flu himself, but was cured by “Dr.Batto’s Medicine” which he just happened to have available for sake at five shillings a bottle!  Whilst in London, among other ‘philosophical apparatus’ he employed the services of some extraordinary black cats, with which he astonished the ignorant. He also professed to have discovered the secret of perpetual motion, and in 1784 was visited by the royal family, the members of which declared that his performance exceeded their most sanguine expectations.

Whilst in London he had developed a rivalry with Doctor James Graham, another quack of his times and on 17th March 1783 a cartoon was published called “The Quacks”. The details of the cartoon are a perfect indication of the quackery of the times. Both are using the fashionable electro-therapeutic machinery as part of their restorative and edifying products, Graham in sex-therapy and Katterfelto in the marvels of nature. Graham (left) is standing on an E.O. table (similar to a roulette wheel), circular and surrounded by the letters E.O. (his establishment in Pall Mall was used for gambling on E.O. tables). He stands astride a long phallic electrical conductor, pointing at Katterfelto, saying, "That round vigour! that full-toned juvenile virility which speaks so cordially and so effectually home to the female heart, Conciliating its favour & friendship, and rivetting its Intensest affections away thou German maggot killer, thy fame is not to be compar'd to mine". He wears a physician's full-curled wig, a ruffled shirt, and a laced waistcoat At Graham's feet stands a duck, on a label coming from its beak are the words "Quack. Quack. Quack", and a thistle indicating his Scottish origin. Katterfelto's stage opposite is a flimsy rectangular structure supported on thin planks; he embraces his electrical conductor with one arm, while his right hand points at Graham; sparks come from his thumb, forefinger, and wig, from a spike on the front of his conductor, and also drop from his chin. He is saying "Dare you was see de vonders of the varld, which make de hair stand on tiptoe, Dare you was see mine tumb and mine findgar, fire from mine findger and feaders on mine tumb - dare you was see de gun fire viddout ball or powder, dare you was see de devil at mine A[rs]e-- O vonders! Vonders! Vonderfull vonders!". 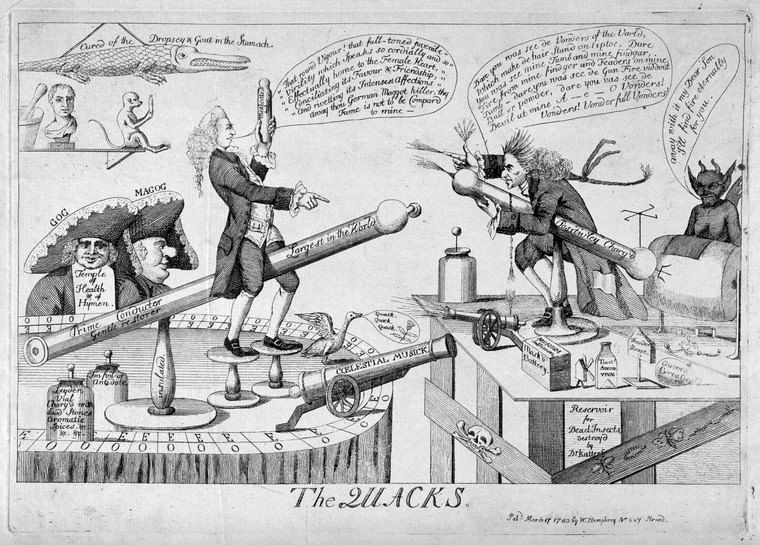 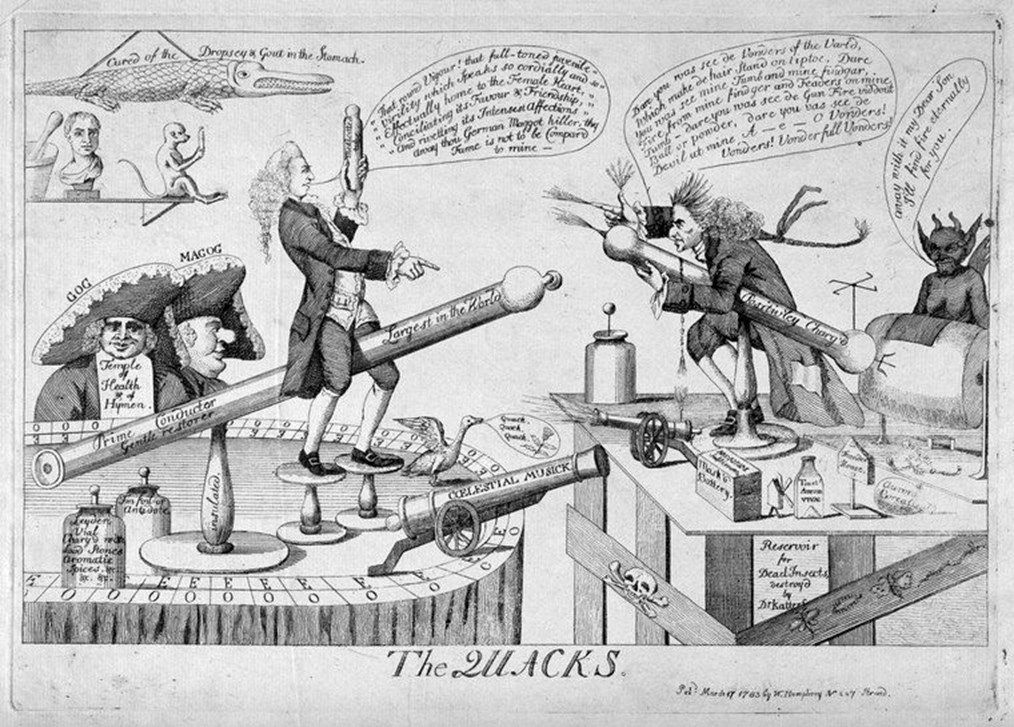 In 1784 Ketterfelto decided to resume his travels across the country, from East Anglia and Cambrideshire to Inverness. And all with his family, several cats and the many boxes of all his “apparatus” loaded onto a wagon. In 1790, in Kendal, “the celebrated Doctor Katterfelto (M.D. and F.R.S) was committed to the House of Correction at Kendal as a rogue and vagabond; and was also convicted of profane cursing and swearing, (very unseemly for a divine and moral philosopher) and paid the penalty inflicted by law for this offence.” His internment only lasted for one night, however.

During his travels he visited Whitby several times where he was very popular and where one of his most popular tricks was to raise his daughter to the ceiling by the attractive influence—as the operator affirmed—of a huge magnet, after she had put on a massive steel helmet, with leathern straps passed under the armpits.

In 1798 Dr. Katterfelto came to Newcastle, where at the Philosophical Societies Room in St. Nicholas’s Church-Yard he would “deliver his various PHILOSOPHICAL LECTURES in this Town”  (although he was renting the room - the event was not organised by the Lit & Phil). The poster details thirty five of the “several hundred different Articles in the Doctor’s possession” from A New-invented WATCH-CASE to An ELECTROFORUS, Whereby he will discover fire without friction that is equal to electrical fire to A NONIUS, Which is capable of discovering the variation of the compass needle in different longitudes. 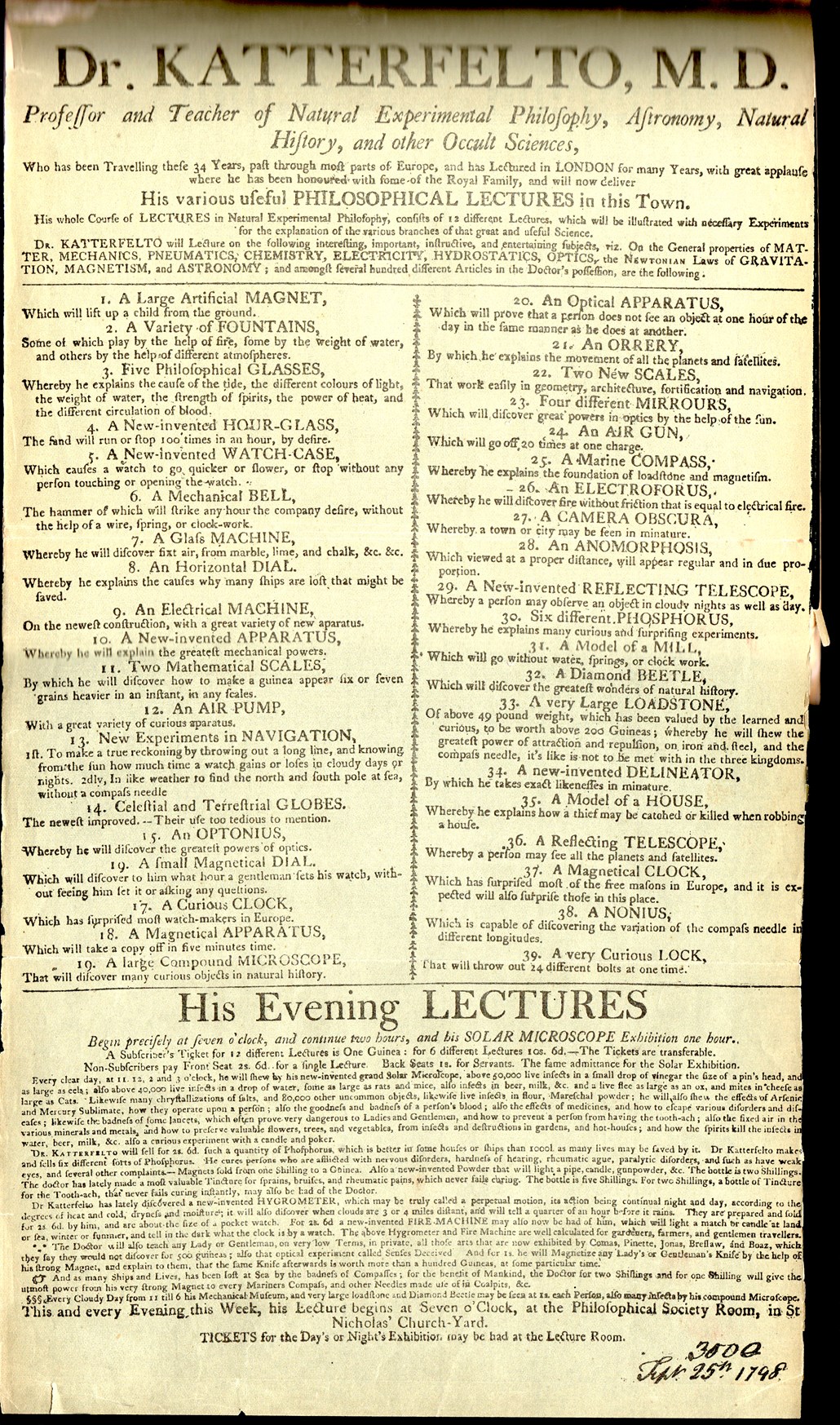 During his time in England he had had a truly punishing schedule with great variations in his fortunes. The year after his Newcastle lectures he died in Bedale in Yorkshire where he is buried. His wife went on to marry a publican in Whitby.

The Quacks cartoon: The Welcome Collection

Poster announcing Dr. Ketterfelto in Newcastle: Robert Spence-Watson, The history of the Literary and Philosophical Society of Newcastle-upon-Tyne (1793-1896)