In Mouse or Rat, Umberto Eco pointed out the problem of translating the Latin word mus into English since it could mean either mouse or rat. Size, it would seem, matters – and not just for semantic reasons since, as Thomas Bewick commented on mus musculus, ‘its minuteness seems to be its best security’. But if there is some small confusion over the size of rodent that the semantic range of mus covers, the smaller version has even bigger issues.

Our muscles come from its diminutive musculus, and while one can imagine little mice running under the skin as one flexes scrawny biceps, that has to be a mouse with two heads (bi + caput, cf. anceps and praeceps). Larger problems arise when describing Hercules (the ancient Arnie) as muscular, and they get larger still when we find the elder Pliny using musculus for a type of whale (OLD2b). Normally under the sea musculus referred to that bivalve we now spell mussel, although we tend to ignore the derivation of the word while eating them. Tasty wee mice are definitely off the menu these days, except for the edible dormouse. But that is glis, not mus. 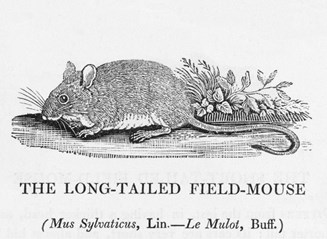 Don’t miss the mus who stars in the primary Latin course set at Vindolanda. He’s called Minimus and can be found at http://www.minimuslatin.co.uk/

Alan Beale is a member of The Lit & Phil and runs one of our regular Latin classes.