Technically women could be members of the Lit&Phil since its foundation in 1793 since there was no reference to gender in the rules. In practice no women became members until 1801, after a new class of “reader membership” was instituted that did not require an election process. The first woman was elected to the committee in 1897.

The Annual Report for 1898 includes the paragraph:

This year has been noteworthy owing to the election of the first lady member of Committee, an addition which the Committee feel is a distinct benefit to the Society, especially in view of the large and increasing number of lady members. Apart altogether from any consideration of this nature, Miss Stevenson’s services have been most valuable, and the Committee much regret that owing to temporary absence from home, her help will not be available during 1898.

Miss E.F. Stevenson was the daughter of James Cochran Stevenson, who had managed the Jarrow Chemical Company, campaigned for a River Tyne Improvement Commission, later becoming its chairman, and liberal MP for South Shields from 1862 until he retired in 1895. She joined the Lit&Phil in 1895, probably when the family moved over the river to Kenton Lodge. The Committee minutes note her first attendance on 11 May 1897. 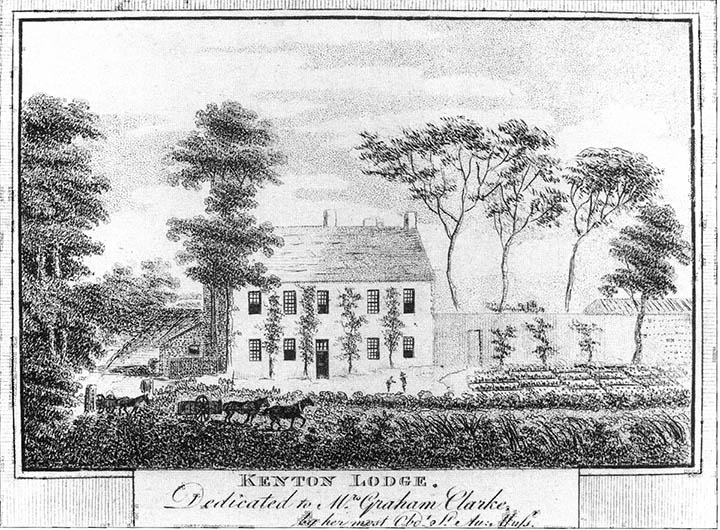 By August 1898 she had returned from her temporary absence and the Committee asked her to replace George Rowell, who had died. She agreed, and they elected her on 15 September. The membership confirmed her position at the anniversary meeting in 1899. She was elected again in 1913 and 1914, but on 13 October 1914 she sent her apologies because could not attend having accepted a post at Armstrong College. She was an acting Economics professor from 1914 to 1916, and lectured until 1923. In 1921 she presented a paper at the British Association meeting in Edinburgh.

Miss E.F. Stevenson (she never appears with her full name) seems to have had a wide range of interests. She had studied Classics at Girton college, Cambridge, and she subscribed to the Journal of Hellenic Studies, which she donated to the library from 1912 – 1920.

The Evening Express (published in Cardiff) for 11 August 1899 carries the following: 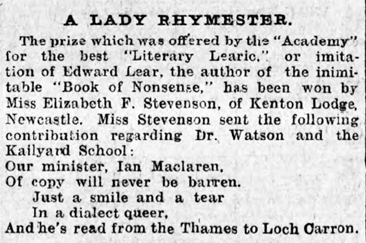 Ian Maclaren was the pseudonym of the Presbyterian minister John Watson, who published Beside the Bonnie Brier Bush in 1894. It became very popular but was attacked by the critics.

She subscribed 5s. to the National Union of Women’s Suffrage in 1911.

Annie Frances Bryant was nominated as a Committee member in 1898 by nine well-connected people, including E.F. Stevenson. Her father was Edward Ross Bryant, who is listed in the directories as a Spanish merchant, probably importing iron ore, or possibly esparto grass for paper-making. They lived at the Red House on Grainger Park Road on the same street as John Theodore Merz, and next to the White House where Joseph John Gurney lived, two of her nominators.

She did not stand in 1899 but the new Committee invited her onto the books committee, and she took particular responsibility to look at those in German and Spanish. She did stand the following year, and was elected. The Committee authorised her to arrange for the periodical cleaning of the ladies’ room (finished in 1899) and for the provision of brushes and a pole to open the windows.

She was invited onto the books committee again for 1903. In August 1904 she sent a letter to the committee about The Queen’s Quair, a historical novel by Maurice Hewlett, presumably objecting to it. In February 1905 the Committee agreed to invite her to attend and the minutes for 14 March record that she had consented to assist in the selection of books. In August she sent a letter noting that the book was reviewed unfavourably in TLS, and suggesting that the library reduced the number of copies of it that it held. (It was the practice to hire new books while they remained popular: the so called H section.)

The minutes for 9 November 1899 record that Ethel Williams was a member of a deputation that argued, “That the Society as a literary institution was not concerned with morals” and that it had no power to withdraw books. 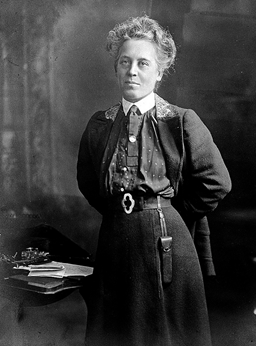 She had joined the Lit&Phil in 1896, shortly after she had qualified as a medical doctor, presumably when she first came to the City. She was elected onto the Committee in 1900, where she continued until 1906, the year when she set up her medical practice. In 1900, when the Committee was reviewing the foreign language books and A.F. Bryant was responsible for those in German and Spanish, she looked at those in Italian.

In 1903 she was a member of a group tasked with inquiring into the condition of the library, arrangements for cleaning, and the porter’s duties.

The lists of Committee members in the Annual Reports did not usually give titles. The commonest exception was in the case of professors; doctors were identified only by their post-nominal. When women joined the Committee they were always identified by their title, almost always Miss at this period, so she was listed as Miss E. Williams MD, until 1903, after which she is simply E.Williams MD. Presumably she had argued that if she were to have a title it should be Dr.

Ethel Williams is best-known for her life after she left the Committee: she was the first female doctor in Newcastle, and one of the first in the region to drive a car. Newcastle University has an important collection of material relating to her, including her suffragist banner.