The Lit and Phil and The Wombat

The wombat now in the Great North Museum, Newcastle

OH how the family affections combat
Within this heart, and each hour flings a bomb at
My burning soul! Neither from owl nor from bat
Can peace be gained until I clasp my wombat.

In 1798 specimens of two very strange and unusual animals were dispatched on a long journey from Australia, to the Literary and Philosophical Society of Newcastle upon Tyne. The Wombat, the first to be seen in Britain, and its companion, a Duck-billed Platypus, were sent as gifts from Governor John Hunter (1738-1821) of New South Wales. Hunter had connections in the North-East and had recently been elected an honorary member of the Lit & Phil. He sent the specimens to Sir Joseph Banks in London who after first examining the animals put them on a cargo ship bound for the North East.

The two specimens had been preserved for the long journey in a small cask of spirits, most probably rum. On arrival, a local woman was hired to carry the cask from the River Tyne’s quayside to the Society’s rooms in the bustling town of Newcastle. Placing the barrel on her head she set off up the steep hill but unfortunately, the bottom gave way and the poor woman was nearly suffocated by the foul-smelling spirits. Imagine her shock at finding two strange creatures lying at her feet. Early naturalists had described the platypus as a hybrid animal – half bird, half beast and this was only the second specimen to be sent to England!

The wombat, however, was the very first – a unique specimen.

Years later, in 1826, our wombat skin was re-discovered in a drawer at the Lit & Phil and given to Newcastle taxidermist Richard Wingate, who, never having seen a wombat in the wild, stuffed it in the rather unnatural begging position we see it in today.  He probably assumed that as it was a marsupial it would behave like a kangaroo! He mounted it in a sitting position, which he believed ‘from the two callosities [hard skin] on the haunches, to be more adapted to its habits.’

The renowned local wood engraver Thomas Bewick was preparing to publish the 4th edition of his A General History of Quadrupeds in 1800 and on learning of the latest arrivals from the antipodes he figured them both in his Addenda to the Quadrupeds. 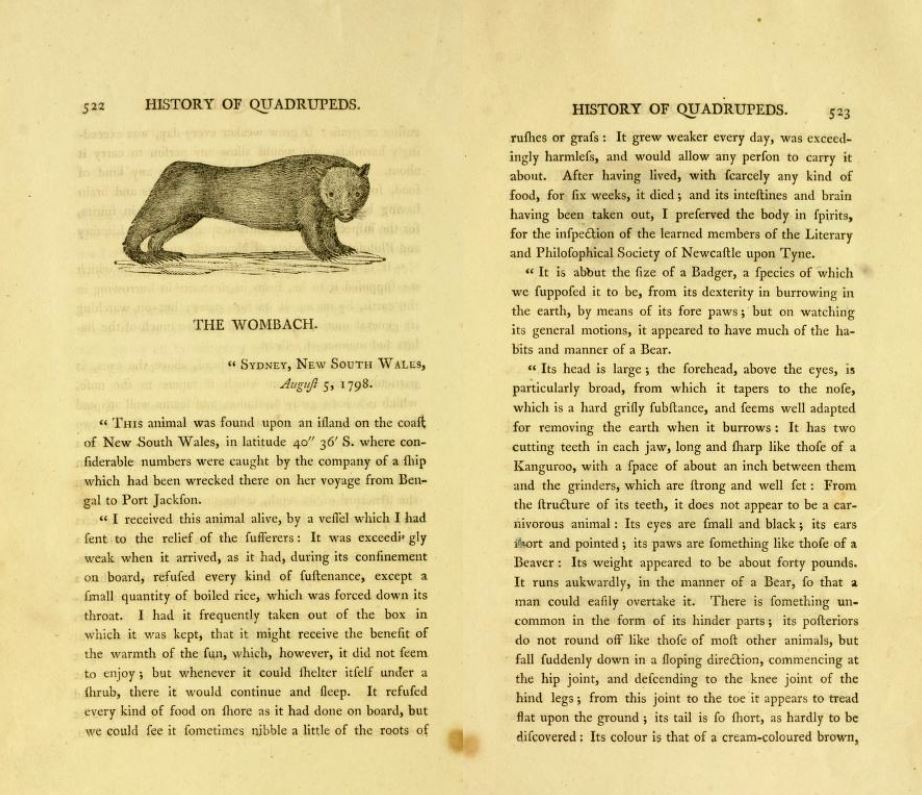