The Ordnance Surveys in Jerusalem and Sinai

In 1864 George Grove (first compiler of the Dictionary of Music and Musicians), who saw a need for a detailed survey of the Holy Land, proposed a scheme to survey Jerusalem as the first step in a scheme to provide clean water in the city. The Ordnance Survey agreed to do the work, provided that it did not incur any costs, and sufficient funds were raised to allow the plan to go ahead. The expedition was led by Charles Wilson, and while it was still working the Palestine Exploration Fund was set up. On his return to England the PEF engaged him to carry out a feasibility study for a proposed survey of Western Palestine, and in 1868 there was a further survey of Sinai. 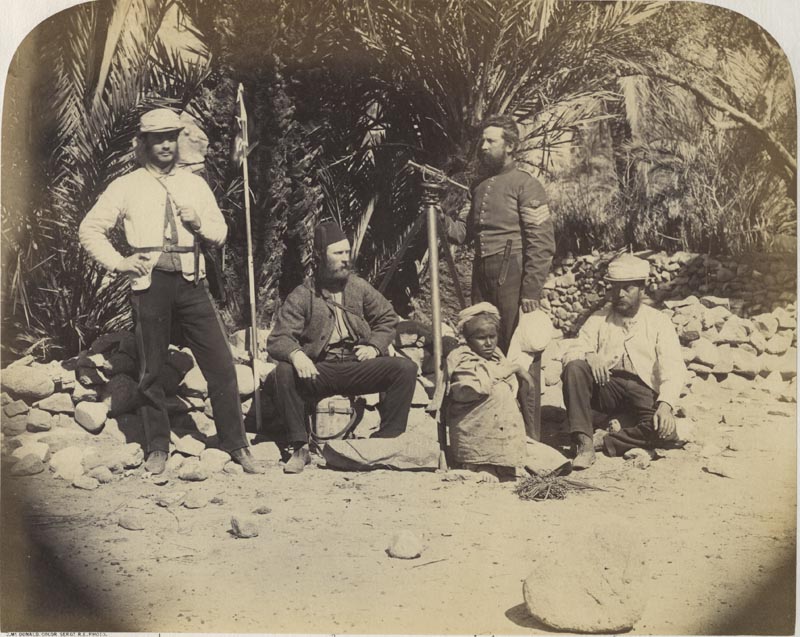 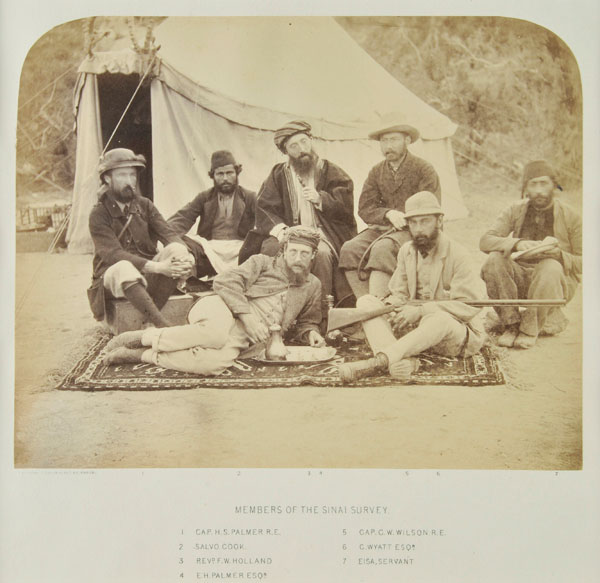 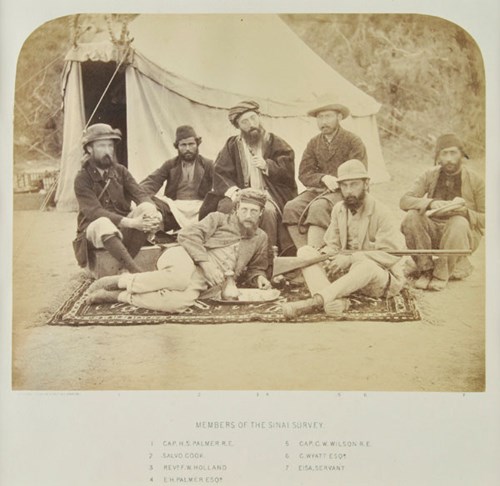 Members of the survey

The PEF published its first report in 1869, and in it 3 gns. is listed from the Lit & Phil as an annual subscriber. The minutes of the House Committee record a payment of £15-9-0, presumably for publications, and the Annual Report for that year includes the total of £18-12-0 paid to the PEF.

The Lit & Phil possesses copies of the published reports of both surveys: Jerusalem 3 vols. (Notes, Maps, and Photographs) and Sinai 5 vols. (Part I Notes and Illustrations, Part II Maps Plans and Sections, and 3 vols. of Photographs). All the volumes have the owner's inscription of E.Watson and the bookseller's embossed stamp of Edwin Slater of Manchester. Edward Watson was a cousin of Robert Spence Watson. His older brother, Thomas Carrick Watson, is probably better known since he was the sole proprietor of Pumphrey's Coffee after Thomas Pumphrey left the partnership in 1869.

Edward, who was born in Gateshead in 1841, was apprenticed to a land surveyor at 20 Heathfield, Moss Side in 1861, and he gives his address as Manchester in 1863 and 1864 in Spence Watson's visitors' book.

On 21 June 1868 he and his mother (Mary Carrick Watson) visited Spence Watson again. She gave her address as Manchester, but his is simply Egypt. It is not clear whether he was returning from Egypt or intended to move there, but he appears in Wards Directory for 1869-70 as a land surveyor at 64 Pilgrim Street. The firm of Edward Watson Associates, land surveyors, still exists.

Strangely the only volume of the Ordnance Survey books to appear in the Lit & Phil catalogue is the one containing the maps of Jerusalem (915.69/58), and the other volumes show no signs of ever having been accessioned. There are two volumes, however, that have the usual stamps: Jerusalem (also  915.69/58) and Sinai (915.31/2). They consist of parts of the full publications, and many of the photographs have hand-written, rather than printed, captions. They appear to be publisher's dummies, which would seem to be unlikely until account is taken of an entry (in the annual report) of the list of books presented to the Society in1902: His Majesty's Treasury – Maps, photographs, and letterpress, relating to Sinai and Jerusalem.

Probably the most important aspect of the publications is the photography. Sergeant James McDonald was a member of the first (Jerusalem) expedition, and when he had any spare time he took photographs of the architectural features, often incorporating local people. They were  considered to be of such quality that 87 of them were published in the official report. He was also a member of the Sinai survey, and his photographs make an even more significant contribution to that report. The series form the core of the PEF's collection.

As yet it is still unclear if Edward Watson had any connection with the PEF feasibility study.

Prior to the mass waves of immigrants to the Holy Land in the late 19th century, the nations of the world were already preparing the ground for the future return of the Jews to the Holy City of Jerusalem. In 1864, co-founder of the Palestine Exploration Fund George Grove and Baroness Angela Georgina Burdett-Coutts of London commissioned a group of Royal Engineers to carry out the Ordnance Survey of Jerusalem, the first modern mapping of the Holy City.

The mapping was a necessary precondition to the baroness’ ambitious project to improve the city’s water foundations, in order to make settling the area a reality.

On September 12, 1864, Cpt. Charles Wilson led the group of Royal Engineers to Jerusalem, witnessing the barren land that was once the great Kingdom of David and Solomon. “I was quite unprepared for the wild desolation of the scene around us,” he wrote in a letter, compiled into his biography, “The life of Major-General Sir Charles William Wilson, Royal Engineers,” by Sir Charles Moore Watson. 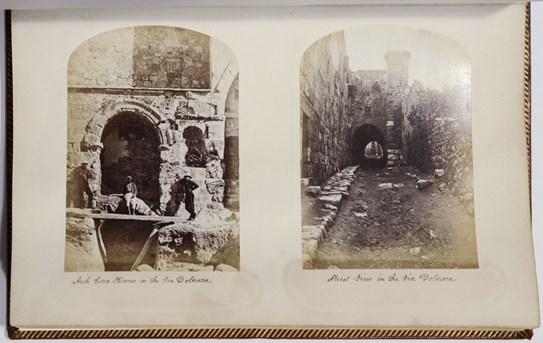 Upon reaching Jerusalem, the future knight was even more disgusted – especially in face of the “immense pile of ugly buildings” that the Russians built outside the Old City. But the disgust quickly turned to amazement, as Wilson saw the whole history of the Holy City right in front of his eyes. “But other feelings came over me on looking down on a spot where such momentous events have taken place, and I do not believe that even an infidel or an atheist could view without emotion those few acres of ground where events happened which have had an ever-increasing influence over the actions of the whole human race.”

Wilson, who would later serve as chairman for the Palestine Exploration Fund, greatly succeeded in mapping Jerusalem, especially considering the fact that the Ottomans were ruling over Palestine, and in addition to his geographical work he was also taking the opportunity to do reconnaissance operations for the British Empire. Wilson also took part in archeological excavations during his time in the region, discovering most famously what would become known as “Wilson’s Arch” at the Western Wall, among other finds. 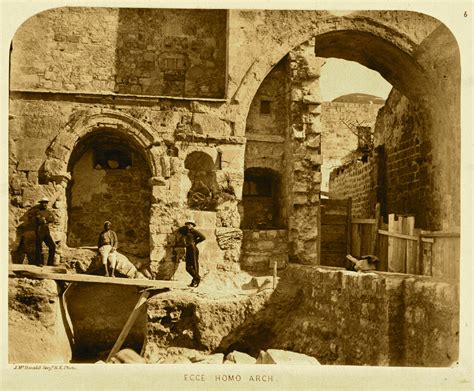 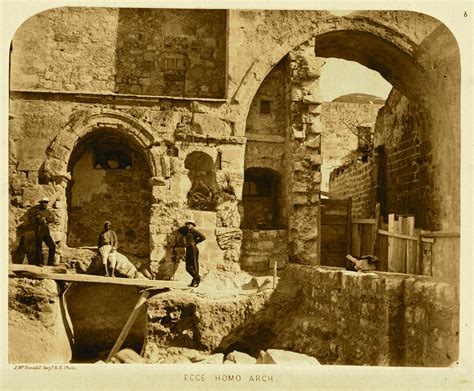 “I have been doing a great deal of underground work lately, and have been rewarded by several discoveries, the most important being an entire arch of one of the approaches to the Temple in a beautiful state of preservation, and a fine portion of the old wall. It is rather dirty work , crawling about in the middle of the earth, but very interesting.”

He also served as director of the Palestine Pilgrims’ Text Society, a company that specialized in publishing texts and translations related to pilgrimages to the Holy Land, and he published “Picturesque Palestine, Sinai and Egypt,” a travel book featuring vivid descriptions and illustrations of the Holy Land and the neighboring areas. On October 25, 1905, Wilson died at Tunbridge Wells, in the southern United Kingdom. The water project never amounted to anything, but Wilson’s work on the Jerusalem Ordnance Survey served as the basis for all future Jerusalem research.

In the preface to the biography on Wilson, Watson wrote that Wilson “probably did more than any other man to increase the knowledge of the geography and archeology of Asia Minor, Palestine and the adjacent countries.”