Books on cookery and household management might not be the first subjects that spring to mind when considering the Lit & Phil’s almost 200,000 strong collection. However, a browse under shelf mark 641 on the Gallery and on the Main Library floor will reveal a variety of interesting and intriguing gems, many of which have sadly not been borrowed for some time, but are definitely worth more than a casual glance.

Let us begin with what is probably the world’s best known book on home economics, Mrs Beeton’s Household Management: A Complete Cookery Book. This weighty volume in our collection from 1909 is more than ten centimetres thick and comes with an imposing dark red spine.

Sections include Farcinaceous Preparations (including Rice Florentine Style, Rice Polish Style and Rice Polonaise Style), Fancy Cakes, Invalid Trays, Chaufroid Dishes and Cold Collation Dishes.  The book also illustrates and discusses room layout, tableware and decoration (all you ever wanted to know about napkin folding technique), kitchen equipment , other household apparatus, as well as sections on first aid and what to do in the event of a leak before the arrival of a plumber.

From cheese sandwiches to sheep’s head broth, the range of recipes is astounding with something for every occasion you can imagine.

Method – Grate the cheese finely, then either pound or work it until smooth with a little seasoning, anchovy-essence or paste, and as much butter as is needed to form the whole into a soft paste. Have ready some thin slices of bread and butter, spread the cheese preparation on half of them, cover with the remainder, press well, trim and shape

Apart from the obvious, cooks will also need 2 carrots, 2 onions, 1 turnip, 2 strips of celery, a bouquet-garni and a tablespoon of rice to complete this recipe. The brains and tongue must be removed before cooking the head. It is worth noting that the former may be used for “brain cakes” and the latter should be cooked and served separately. Need I go in to more detail……?

The volume is illustrated by many appetising (and not so appetising perhaps to the 21st century cook) illustrations including hors d’oeuvre dishes, soups, dessert fruits, some examples of which are below. 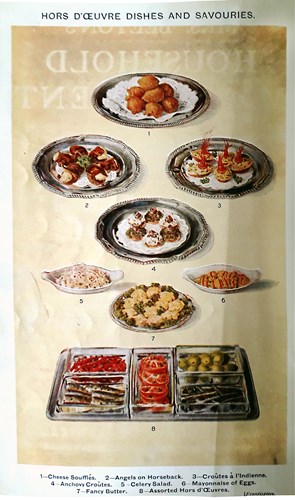 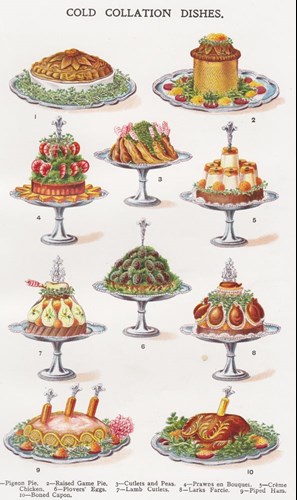 Climbing up the spiral staircase on to the Gallery you will find May Byron’s Rations Book containing 650 recipes for the present time. (1918.)

Written at a time of rationing during the First World War, in Chapter One (Preliminary Remarks), the author addresses the reader thus:

”I am out to help you, frankly, to make the best of a bad job. Nearly all the most valuable component parts of our usual daily food are very scare or very dear…..…never a thrifty nation, we have dwelt for half a century in a fools’ paradise, believing that ‘tomorrow shall be as this day and much more abundant’ . Now, when faced with the crude incontrovertible fact that we live in an island, and that nearly all our food has been coming from outside that island, there is no doubt that the present rude awakening should – in the long run- be very much to our advantage…..I conjecture that, sooner or later, we shall  emerge from this dire emergency a great deal cleverer than we were before; having acquired all sorts of knowledge, and exploited all manner of possibilities, which we should have regarded with a stare of blank bewilderment in 1913.”

Boil equal parts of potatoes and turnips in water, with one onion and a head a celery, pepper and salt. When the vegetables are soft, pass them through a sieve. Return the soup to the fire, and as soon as it boils add some chopped parsley.

Stone enough dates to cover the bottom of a glass dish, and put half a blanched almond in each; pour over them one pint of (powder) custard and serve cold. This is particularly nutritious.

Back on the Main Library Floor, Tante Marie’s French Kitchen (1950), translated and adapted by Charlotte Turgeon, was last borrowed in 1970 – surely something that must be rectified when books may once again be taken out by members. This work has been used by generations of French families and is noted for its simplicity above all else. From hors- d’oeuvre to homemade liqueurs, “there is nothing in it too difficult for an ordinary housewife….all recipes are given in the clearest and simplest terms possible, so that even those entirely unaccustomed to cooking may really understand.” 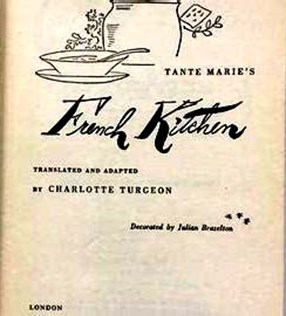 Another classic name in the field of home economics is Good Housekeeping, a magazine to which the Lit & Phil subscribes today. Nestled in the 641s, however, are several volumes from the 1950s: Good Housekeeping’s Basic Cookery in Pictures. One volume from 1952 was last borrowed in 1966 – another travesty. Although the colour photographs  may be somewhat garish – is that a seafood dish or a scene from a horror film?  -  the recipes still stand the test of time.

If you are considering tomorrow’s breakfast already, you might wish to know that  “both pork and beef sausages may be used for breakfast, either grilled or fried, and accompanied by fried bread and if possible tomatoes or mushrooms.” If bloaters are more appealing then look no further than Good Housekeeping:

“Prepare the fish as shown for kippered herrings, but split them open after removing the head and take out the backbone .Brush over with fat and grill for 5-7 minutes, turning them to cook on both sides.” 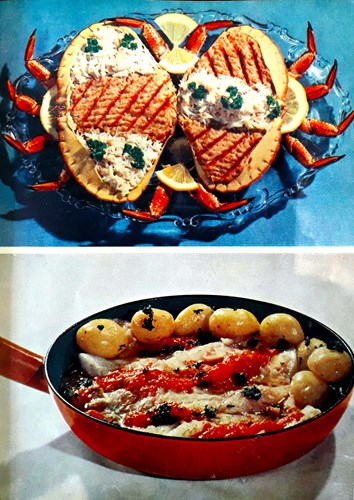 We end with the magnificent Elizabeth David whose 1958 volume French Country Cooking is “decorated” by John Minton. David’s style and tone is commanding and matter of fact,  but what always shines through is her love of France and its gastronomy. 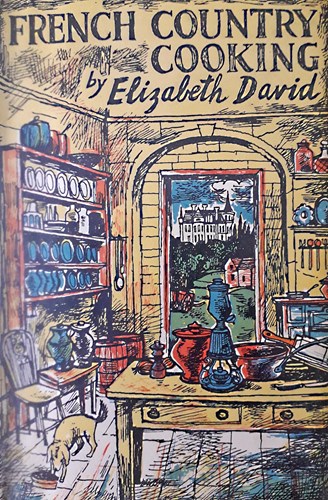 A country sweet from the Berry district of France.

Peel and slice a pound of apples, and put them in a dish with a little sugar and 2 tablespoons of brandy. Make a batter with half a pound of flour, 2 eggs, a pinch of salt, 3 tablespoons of sugar and a tumbler of milk. Stir the apples into the batter and pour it into a shallow buttered tin and cook for 45 minutes in a moderate oven.

And finally,  what could be simpler as we edge into summer:

A pleasant way of serving cucumbers is to have a bowl in front of each place containing salted iced water, a few cubes of ice, slices of peeled cucumbers cut lengthways and a few cut leaves of mint. This treatment makes the cucumbers deliciously cool and crisp.

Kay is the Librarian of the Lit & Phil.