This month is Pride Month, during which time the LGBTQ+ community comes out to celebrate their identity. More and more scientists, innovators, and inventors are coming out, more support networks like those listed on LGBTSTEM Day, and more are there for people looking for advice or community. As part of pride month, this post celebrates one of the more overlooked contributions to science by a member of the LGBTQ+ community.

Introducing Frederick the Second, King of Prussia. He ruled from 1740 until 1786. In Germany, he is known as “The Old Fritz”. He modernised many laws to make society more progressive, made Prussia a leading military power in Europe, and is particularly famous for the innovative way in which he revolutionised agriculture with the humble potato.

While potatoes were originally domesticated by indigenous peoples of the Americas in the Andes region, they were later discovered by Europeans after the Spanish invaded South America in the mid-16th Century. Today, potatoes are the world's fourth-largest food crop after maize (corn), wheat, and rice.  They weren’t initially popular back in Europe, as they were seen to have no taste or flavour, and people were suspicious of them. The town of Kolberg officially replied to the King’s order to grow potatoes as follows, “The things [potatoes] have neither smell nor taste, not even the dogs will eat them, so what use are they to us?“

Frederick however had big plans for the potato and wanted his people to begin farming the vegetable to help feed the growing state of Prussia. The North European plain had adequate drainage and rugged land that would easily accommodate the potato. The potato yielded more calories per acre than any other alternative at the time, and long-established crop rotation patterns meant that fallow fields could now be utilised for growth of a new crop which would not interfere with existing farming practice.

Most modern biographers agree that Frederick was gay. In fact, after a humbling defeat on the battlefield, Frederick wrote, “Fortune has it in for me; she is a woman, and I am not that way inclined.” Irony is not lost in the fact that Frederick was glorified by Nazi Germany as a great leader and personally idolised by Adolf Hitler.

To this day, if you visit Old Fritz’s grave at his former favourite residence, Sanssouci in Potsdam, you will often see people putting a potato on his gravestone to honour the potato king. 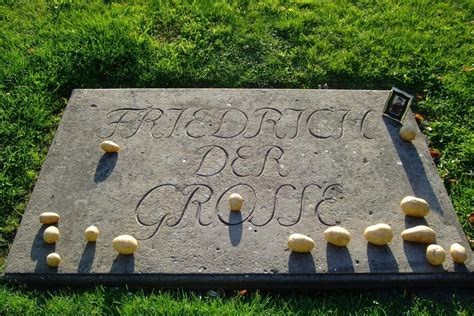 The grave of Frederick the Great

For further reading on the life and history of Frederick the Great at the Lit and Phil, we recommend;

For further reading on the potato at the Lit and Phil, we recommend;  Salaman and Burton, The history and social influence of the potato (Cambridge University Press 1949)

Bareham, Lindsey., In praise of the potato. (Doubleday 1989)